‘Power of One’ award recognizes Whipple’s passion for peace 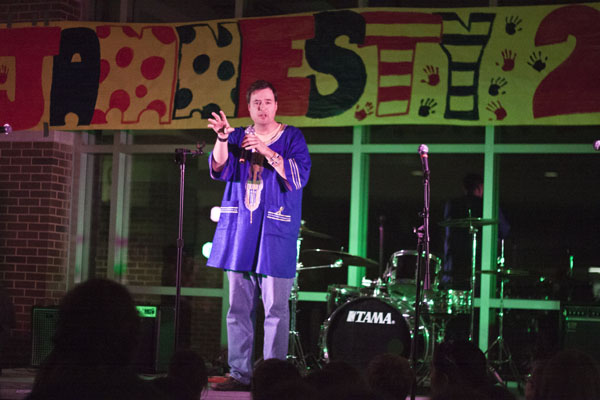 APRIL ANNIVERSARY: Speaking to the Jamnesty crowd, Matt Whipple, Stand for Peace co-sponsor, explains the historical significance of April 2014 in regards to the twentieth anniversaries of the Rwandan genocide and fee elections in South Africa. Whipple emphasized the importance of education and taking small steps to help others.

The Power of One Award will be presented to Matthew Whipple, social studies teacher, by the Illinois Holocaust Museum on April 24.

This award is given to one person every year, and this custom began in 2012, making Whipple the third recipient. Whipple was nominated by his former student, Joy Bolger, and was supported by Superintendent Dr. Michael Riggle; Principal Dr. Brian Wegley; Dr. Jim Shellard, student activities director; Terrence Jozwik, instructional supervisor of the Social Studies Department and other colleagues.

“[The purpose of this award] is to connect the individual who demonstrates tremendous amounts of selflessness and community spirit towards helping others,” Evette Simon, deputy director of the Illinois Holocaust Museum, said.

Jozwik believes that Whipple deserves this award for his continuous effort to create world peace and his profound influence on high school students.

“[Whipple] was able to get [students] to care about issues by doing presentations and taking other actions,” Jozwik said.

Before he was notified that he won the award, Whipple said he had no idea that such an award existed. Despite his surprise, he said he appreciates the honor.

“It’s nice that the museum is taking the opportunity to recognize people that [make a difference], and I feel very fortunate that they happened to recognize me,” Whipple said.

According to the Illinois Holocaust Museum, Whipple was chosen for his dedication to raising awareness amongst South students and the Glenview community about genocide and human rights abuses through his work as a high school teacher and faculty cosponsor of Stand for Peace.

“A lot of what happens with Stand for Peace are students taking action, but we wouldn’t be able to get anything done without him,” Izzy Fradin, executive board member of Stand for Peace, said.

According to Whipple, Stand for Peace is a way for him to do what he loves in the company of students that share a mutual passion for worldwide peace and equality.

“I love what I do and I’m fortunate to be in a place where I can do what I do easily, in a way that’s supportive,” Whipple said. “You never think about getting an award for it.”

Whipple also said that he feels guilt about receiving the award because he works with many other people, making his actions a group effort rather than a single-handed one.

“There have been lots of other people that have joined me in Stand for Peace and in other organizations,” Whipple said. “If I have served, I have certainly not served alone.”

According to Whipple, students involved with Stand for Peace always put in a solid effort, making it easy for him to praise them.

“Whipple has a really good way about making you feel good about yourself,” Fradin said. “When you hear how proud he is of you, and what you’ve accomplished, you feel like the greatest person ever.”

The students of Stand for Peace agree that Whipple deserves the award. Whipple also received $500 to put towards Stand for Peace, which they will use to sponsor a child’s education through Matanya’s Hope, which Whipple thinks is an appropriate use.

“I’d like to share [the award] with all sorts of people who have been really important in sharing this with me,” Whipple said.