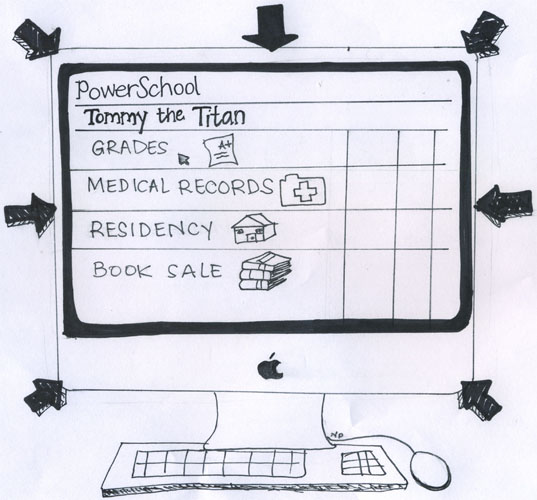 South is piloting a new software program, Infosnap, to work with Powerschool and better incorporate student information, according to Wegley.

According to Riggle, Infosnap could have multiple uses for South including registration, uploading medical information, and making payments, all from a built in interface into the Powerschool portal.

Ryan Bretag, District 225 director of instructional technology, said that the goal of the project is to centralize student information such as medical history, home address and emergency contact numbers into one place. Information will also be more accessible for parents.

“Infosnap basically takes all our paper registration and […] digitizes all that and makes it easier for parents and students to register,” Bretag said.

This semester is a test run for Infosnap with new Titans filling out digital copies of registration forms, according to Bretag. Bretag said that South hopes to use Infosnap to streamline the summer book sale and help with clarity of information during registration of new students.

“No longer will we have the four to five page forms going home that were hand-filled out, sent back, then someone had to take the [handwritten form] and manually re-enter it digitally,” Bretag said.

According to Riggle, yearly subscription to Infosnap is $20,000, but the program saves costs when fewer people are needed for the book sale and in the long run will be beneficial.

Bretag said he believes that the efficiency of Infosnap will better allow staff to help parents and teachers and that having the information centralized and ready will make face-to-face interaction even more effective.

Dr. Lara Cummings, assistant principal of student services, said that when South switched to Powerschool, she knew it was compatible with Infosnap.

Cummings said she had used Infosnap with her own children’s schools and was very familiar and comfortable working with the program.

“We still have a lot to learn about [Infosnap],” Cummings said. “I’ve definitely used it on the user-end, but [we] haven’t used it behind the scenes, so we’ll learn as we go. But I feel confident it is the right move for District 225.”