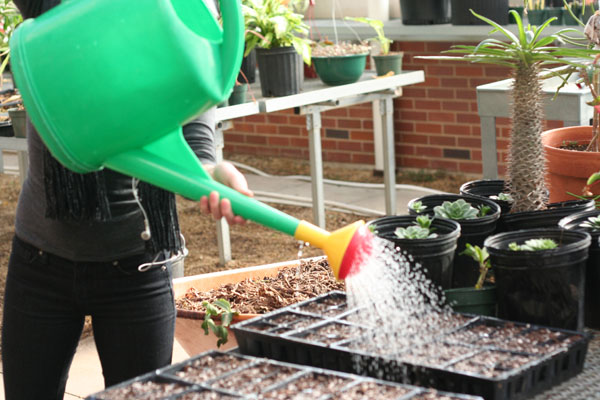 CAUGHT IN ACTION: A member of the horticulture team helps take care of a planting.

Last year, the GBS Horticulture Team placed first in the state tournament, and 19th at the national championship out of 46 teams.

This is the 22nd time in a row that the GBS horticulture team has won the state championship, and the team last year continued the tradition.

According to senior Lauren Kessler, there is an important aspect of teamwork that keeps the group together.

“I think my favorite part of horticulture is the people on the team,” Kessler said. “We become like a family.”

According to Kessler, at nationals, GBS had to pick which horticulture category to compete in. Kessler said that they picked nursery and landscape. It consisted of having to identify certain plants, estimate landscape design, pretend to work at a shop and sell a product to a judge, and team activities.

“Nationals was definitely intimidating, especially since I had never competed in a competition prior to this,” Kessler said. “It was funny because we were the only city school there. Everyone else grew up in rural areas.”

According to Kessler, each team at the national tournament earned either a gold, silver, or bronze plaque. Despite having an urban background, GBS earned a silver plaque.

“At first they called our team up to get the bronze plaque, but then a few minutes later they realized they had made some mistakes and we actually ranked silver instead!” Kessler said. “No one can describe the happiness we felt that moment because we were so proud of ourselves. I almost cried.”

To prepare for these tournaments, Yordy teaches the students about different plants and then creates a mock tournament. According to Yordy, it really helps the students because by the time the reach their first tournament, they have already had many practice tournaments.

“The first thing you do is you just get them a little bit used to what a horticulture contest is like,” Yordy said.

In the coming years, Yordy expects the team to perform as outstandingly as GBS has before. In addition to new members of the horticulture team, there are four returning students: Kessler, Duncan, senior Daniela Aponte, and senior Annette Manusevich.

“There are going to be twenty people that are going to come out [to our meeting], and I know four of them, so I have no idea what the personality of this team is going to be like,” Yordy said. “I do know the four people [that] I have coming back…are hell on wheels.”

Kessler indicated that it was an honor to attend the state and national tournaments, especially under Yordy. Although she did not compete at state and served as an alternate, she attended to contribute to the team.

“Nationals was such a great experience and I don’t think I could have spent the trip with better teammates,” Kessler said. “I’m really proud to represent GBS.”