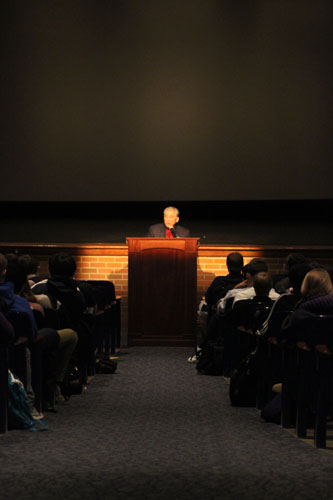 Elster was 11 years old when his mother, father and younger sister were killed by Nazis. Elster escaped from the group being sent to the concentration camps from the ghetto where he was living in Poland. He was a hidden child until the country was liberated, and he was reunited with his older sister who had also been hidden by the same family. After the end of WWII, Elster lived in a Polish orphanage until coming to the United States.

According to Stacy Flannery, social studies teacher, Elster’s presentation, which he has done for the past three years at South, reflected the course’s focus on personalizing what students are reading about in textbooks.

“I think one of the things all of our speakers have done is connect with the kids and give them a sense of why their story matters to them and how they can take something from their story and use it in their own lives,” Flannery said. “I don’t think [Elster] thinks anyone in that room is going to be subject to the experiences that he had, […] but evil exists in locker rooms and lunch tables and lots of other places, and here is as a model and inspiration to all of those kids about reasons which they can be upstanders in their own world.”

After Elster told his story, junior Alexis Landsman said she had a better understanding of what she learned about the Holocaust.

“All these numbers are thrown at you, like six million people died, there were this many tens of thousands of concentration camps,” Landsman said. “I think that it takes away the human sense of what was really going on. I think that [Elster’s] presentation just showed that each person […] from the Holocaust had a story that was noteworthy.”

Although Elster spoke about being forced out of his home and his cold, hungry winters hidden in an attic, he consistently mentioned that he “wanted to live so desperately.”

Listening to the presentation, Terrence Jozwik, Social Studies Department instructional supervisor, took away the message not to be a bystander.

“And he alludes to even in this day and age, there are still problems out there, and we read about them in the newspapers and we kind of say, ‘Oh, those poor people. Somebody should do something,’ but the idea is you are that somebody, perhaps, and you should do something,” Jozwik said.

Junior Gabby Medovoy, who volunteers at the Holocaust Museum in Skokie, hopes that students continue to share stories like Elster’s.

“[Elster] has suffered through so much, and he’s still going around today and sharing his story,” Medovoy said. “He’s looking to us [to tell future generations] we cannot let this happen again.”

According to Flannery, she hopes the students’ positive reactions to Elster, evidenced by the long line of students thanking Elster and buying his book, meant that they understand the value of hearing a survivor’s story.

“I tell my own students there’s a chance if you have younger siblings they might not have this opportunity, […] and so I tell them one day you’re going to be able to tell your child, ‘I heard someone speak who lived through this and let me tell you what they told me,’” Flannery said.  “I want them to see the value in the fleeting nature of the moment, and I really think they get that.”

While Flannery recognizes that students won’t always be able to hear a Holocaust survivor speak, she hopes that Elster’s presence will live on through her teaching.

“I don’t want to be pessimistic, but our teaching of [the Holocaust] will be diminished,” Flannery said. “I’d like to think I’m really good at [teaching], but someone who stands in front of you and lived it, I can’t deliver.”

Jozwik said teaching history after all survivors of an event are gone is the history teacher’s dilemma.

“Now that those people are gone, we have to keep the stories alive,” Jozwik said. “But that’s the job of the history teacher to make that past come alive as best we can even though those participants are no longer around.”