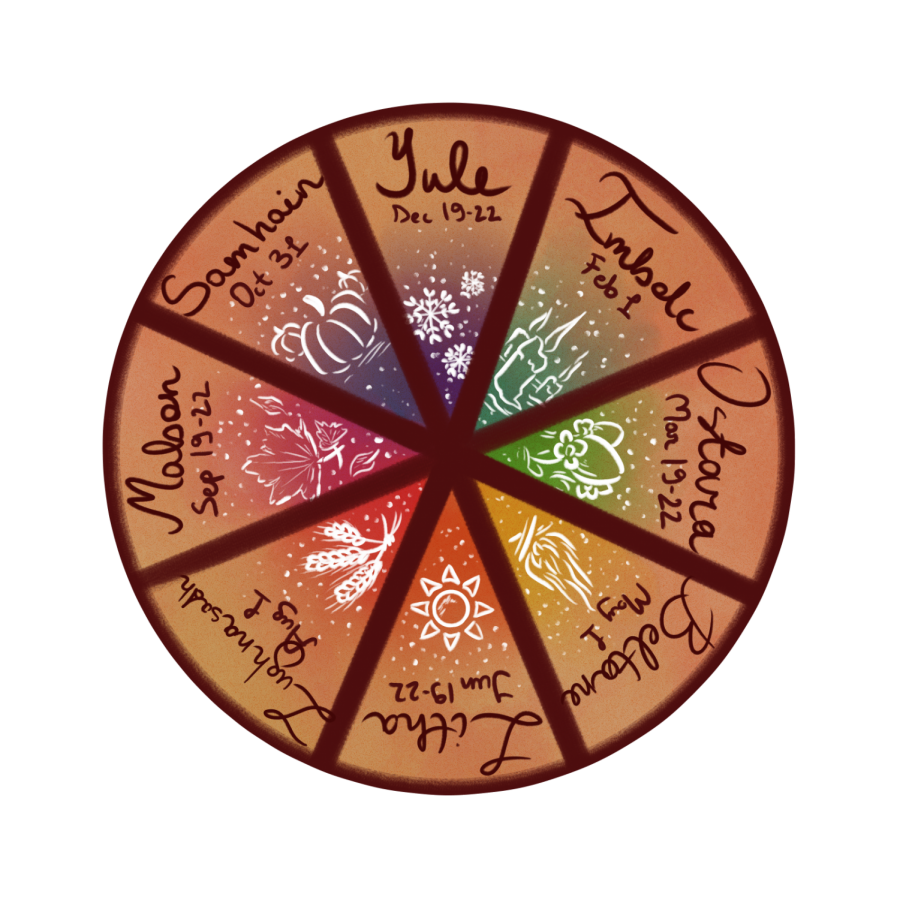 For many, the mention of witchcraft may conjure images of bubbling cauldrons from Halloween movies or spells being cast in Harry Potter. But witchcraft is a real practice, based in centuries of tradition and modern ideas, senior Faith Roche said.

Practicing modern witchcraft can mean different things to different people, Roche explained, but it generally involves using folk healing practices, which focuses on traditional cultural medicine, as well as natural elements to manipulate energies; witches believe that natural energies are already present in the world, and can be influenced to get a certain outcome.

“[Witches focus on] the elements of certain things that they identify with most, like herbs and different folk remedies and use the energy that they get from those things to be able to get [a certain effect],” Roche said. “It’s kind of comparable to prayer in a lot of other religions.”

In order to influence natural energies, witches use tools such as crystals or candles. Roche said divination tools like tarot cards or pendulums are also common. Senior Lily Meyers*, who has been practicing witchcraft for about six months, explained how various objects like crystals, candles or even herbs are often used to help them manifest their goals.

“Some people manipulate herbs in the kitchen and others work with crystals and candles, but I feel like it’s basically taking symbols, giving them intention and power and [using] that power in your own life for whatever you need,” Meyers said.

Symbols, such as pentagrams or pentacles, are also a big part of witchcraft, Meyers said. Many witches, including Meyers, create their own symbols, called sigils, to physically represent different intentions they have, she said.

“It doesn’t really matter what they look like as long as they mean something to you,” Meyers explained. “Some people make the symbols visually based on what they want to achieve with it, or sometimes people use a grid and then they take all the letters, make a circle with it and then connect the lines. There are different ways to do it, but it’s kind of just creating a custom image for your intent.”

Although not all witches use the same tools, crystals are commonly used across many branches of witchcraft, Meyers explained. Crystals are believed to have energies and healing abilities that vary depending on the type of crystal, a philosophy that dates back to ancient Hindu and Buddhist beliefs, according to healthline.com. Meyers said that she uses crystals to manifest certain intentions and has found it very beneficial.

“I definitely think it has transformed my life for the better because I feel like putting the power in my hands has been really empowering,” Meyers said. “It’s been really good to know the power that you have is really important and seeing [it] manifest in different ways is incredible.”

Candles can also correspond with certain intentions and Meyers explained that she uses  colored candles for specific manifestations. To infuse the candles with their purpose, Meyers uses the symbols and sigils she has created.

“I have one main candle that [I light when] I’m doing all of the [witchcraft] work, so it’s almost like initiating everything, and then I have various candles with colors that correspond to different intentions,” Meyers said.

Although most witches use tools for their practice, there are many branches of witchcraft that people can practice, senior Florence Williams* said. Many witches are eclectic witches and pull elements from various traditions to create their practice, according to arcane-alchemy.com. Other types of practices include green witchcraft and hedge witchcraft. Williams said that they are a kitchen witch and incorporate natural energies and intentions into the food she prepares.

“Kitchen witchcraft is basically cooking, but it’s taking the ingredients and seeing the meaning behind them and using that to make a dish as a whole,” Williams explained. “I [have] a recipe for self love hot chocolate and I use vanilla and cinnamon because both of those spices are associated with love.”

Although witchcraft is not directly connected to any specific religion and anyone can practice it, some religions may use it as part of their worship, such as Wicca, which is a nature-based religion that includes many pre-Abrahamic traditions (predate Christianity, Islam and Judaism), according to Encyclopedia Britannica. Because Wicca is based on nature, the eight major holidays are related to the changing of the seasons, shown in the wheel of the year.

Although Wicca’s major beliefs do influence some witches’ practices, Roche explained that not all Wiccans are witches and not all witches are Wiccan.

“The biggest part [of Wicca] is choosing to see this divine spirit of the universe, and how it runs through all of the world,” Roche said. “There are gods and goddesses and minor deities, but as with all religions, the deities within Wicca are kind of just a way to be able to conceptualize this greater power within something that we can understand. I  think we can choose to do that through nature.”

Williams’ favorite part of Wicca is the way it allows them to feel in control of their own density through harvesting and manifestation. Whereas the monotheistic religion Williams grew up practicing emphasized God’s power over her future, Wicca taught her to believe that one can make anything happen for themselves if they have intention and will, she said.

“[In Wicca, we believe] you are a powerful being [and should] use your power to help the powerless,” Williams said. “[Wicca] is also a big believer in karma and the karmic threefold law, where if you do bad, it’s going to come back to you three times as bad. I believe in that, in a sense, but I also believe intentions play a big role in it. With Wiccan beliefs, it’s more black and white but I believe the intention behind it has some merit.”

Because Wicca is a nature-based religion, it focuses on the seasons and the changes between them, which are a time for self-reflection and growth, Roche said. Although Roche has only practiced witchcraft a few times, she explained that she enjoys the close connection to nature and philosophy that both Wicca and witchcraft provide.

“I think most people are searching for some kind of greater truth or answer in life and for me, I really like being able to find bits and pieces of that answer within nature,” Roche said. “[Witchcraft is about] seeing this higher power within everything around you. I think having that viewpoint really helps you appreciate the world in a very different, beautiful way.”