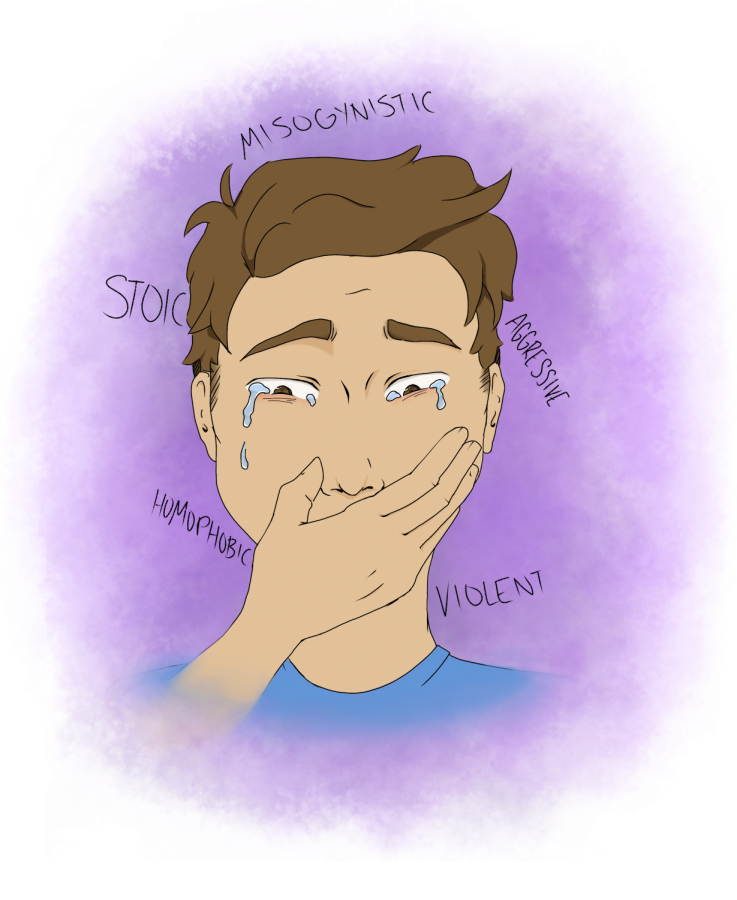 It can be heard as a hush settles over the audience and the enchanting first notes of the choir float over an awed crowd, five baritones struggling to be heard over 20 sopranos. It is even more obvious within the clamorous array of voices spilling out of the boys’ locker room; derogatory and objectifying terms bouncing off of the lockers and into the hallway. From fine arts to athletics, the impact of toxic masculinity can be witnessed in nearly every corner of South.

Toxic masculinity is defined by the American Psychological Association (APA) as a set of cultural norms and beliefs that men must suppress emotions and use violence against others as an indicator of power. In guidelines released in Aug. 2018 for psychologists working with males, the APA acknowledged that while most men are not violent, these standards have significant effects on men’s mental and physical health, such as higher suicide rates and loneliness increasing with age. Much of this is attributed to societal pressure for men to suppress their emotions and to associate asking for help with weakness, the APA said.

“Traits of so-called ‘traditional masculinity,’ like suppressing emotions and masking distress, often start early in life and have been linked to less willingness in boys and men to seek help, more risk-taking and aggression — possibly harming themselves and those with whom they interact,” The APA guidelines said.

Toxic masculinity often spills over into the rest of society and affects more than just males. The overarching ideals about what it means to be a ‘man’ influences institutional and interpersonal masculinity in order to establish power of the masculine over the feminine, according to Understanding Masculinities and Violence Against Women and Girls, a self-learning booklet about masculinity published by the United Nations Entity for Gender Equality and the Empowerment of Women (UN Women). The booklet explained that this unequal power dynamic can manifest in physical or emotional violence against women, unequal roles in family responsibilities or a failure of legal systems to enforce laws on gender-based violence.

“It remains true that having power over political, economic and social affairs is associated with masculinity,” UN Women wrote. “The norm remains that leadership is seen as masculine — authority still has a male face. Women who go into politics or who seek senior positions in business are often stigmatized for being too manly. Because women in these roles might be seen as challenging men, they often face harassment and abuse from men who are attempting to reinforce their own power and control.”

“Locker room talk is talking about a woman as if she was an object,” Nash said. “There have been many cases of professional athletes, politicians and public figures who have got caught [objectifying] women and [are] let go. There is a lack of responsibility. You can say whatever you want and not have consequences.”

Nash explained that at South, the radio’s air time tends to fall to male sports, leaving South’s female athletes in the wake of sports such as boys’ football, basketball and baseball. While radio has made an increased effort to include South’s female athletes, at the national level that proves a more difficult task, Nash said. Radio shows have a limited time on air, Nash included, so they have to focus on what will capture people’s interests. She explained that while mens’ sports have captured an audience throughout the nation, women’s’ sports have been unable to achieve that same level of attention due to men’s dominance in the industry.

For junior Chad Porter*, the undercurrent of toxic masculinity runs deep within interactions between him and his friends. Porter explained the pressures from his peers to participate in hook-up culture and date girls determined to be the prettiest. He added that he has personal experience with this pressure, as he changed his homecoming date due to insults from his friends who claimed his previous date was not “hot” enough by their standards.

“Here’s how it works: if you get with the hottest girls, you get respect for it,” Porter explained. “So sometimes I’ll go for a girl that I don’t like as much as another girl just because my friends and peers will give me respect.”

However, Porter countered the issues of toxic masculinity with the perceived double standards of girls talking about boys behind their backs, an issue he said diminishes toxic masculinity. He pointed to the ‘player’ trope, which he explained as a frustrating hypocrisy.

Senior Mitchell Mortenson said that while many students recognize toxic masculinity as a problem plaguing South, they continue to downplay its effects. The same students who minimize gender toxicity contribute to its consequences, Mortenson explained.

“The guys that enforce toxic masculinity, they recognize that as a problem, but they don’t think they’re a part of the problem,” Mortenson said. “Those guys are going to sit there and be like, yeah [toxic masculinity is] a thing, it is just not that big of a problem. It’s because they’re feeding into it and they’re playing into it.”

Toxic masculinity affects more than just sports, Choir Director Andrew Toniolo explained. South’s choir has always had a smaller number of boys. Toniolo said that boys do not typically pursue artistic passions because the societal standards of a boy do not line up with singing in a choir room. He added that while we cannot force change, activities such as choir might be a possible answer.

“[Choir members] find things in one another through their work together that remind them of themselves,” Toniolo said. “Deep bonds between people are forged from these shared experiences. Things like skin color, gender, [sexual] orientation, and religion become non-issues when determining someone’s value in a group.”

While masculinity can be toxic, Toniolo believes that the non-toxic side can be a good thing to embrace. However, it becomes harmful when it is used to harm others. He explained that it is important to embrace yourself, masculine or not.

“I don’t think being masculine is a bad thing,” Toniolo explained. “I think some people like being masculine — it’s a good thing for them, and I think we need masculinity in our society.  But how one uses their masculine attributes is crucial. Being a good person to yourself and to others, masculine or not, is the important thing.”

“‘Gay’ is not the only part of our identity,” Bertke said. “Gay men make up a small part of the LGBTQ community and we wanted to be more inclusive of all, not just the men.”

Bertke explained that everyone at South deserves the same respect, regardless of our masculinity, femininity, or sexuality. If people show more humanity to everyone the world will be a better place, he remarked.

“We need to think about our shared humanity when we interact with others, from how we talk to them to how we treat them,” Bertke said.

Senior Olivia DeMattia, student council vice president, stated all genders are bound to societal standards, which she feels are present at South. However, DeMattia said the sparks of change are evident throughout the school, and only education can ignite the end of toxic gender roles. She explained that conversations and consequences are tools that can be used to move in a positive direction.

“In order for true change to occur, uncomfortable conversations need to be held, and that’s where growth starts and that’s what’s going to be the catalyst for change,” DeMattia said. “So until we start having those uncomfortable conversations and start talking about it, change isn’t going to occur. I think consequences need to be upheld and I think once more people learn and become more informed about it and start talking about it, I think we will see change.”

DeMattia explained that no one is bound by gender roles. These binaries bind people to unrealistic standards, and while fighting against gender stereotypes is often stigmatized, DeMattia believes that being uncomfortable is the key to making a difference.

“You can’t [focus on a person’s gender], whether they’re female, male, transgender, non-binary, because that’s not what defines them and you shouldn’t place yourself into what personality you should be based off of your gender,” DeMattia said.