Helping Hands: South students give back to community 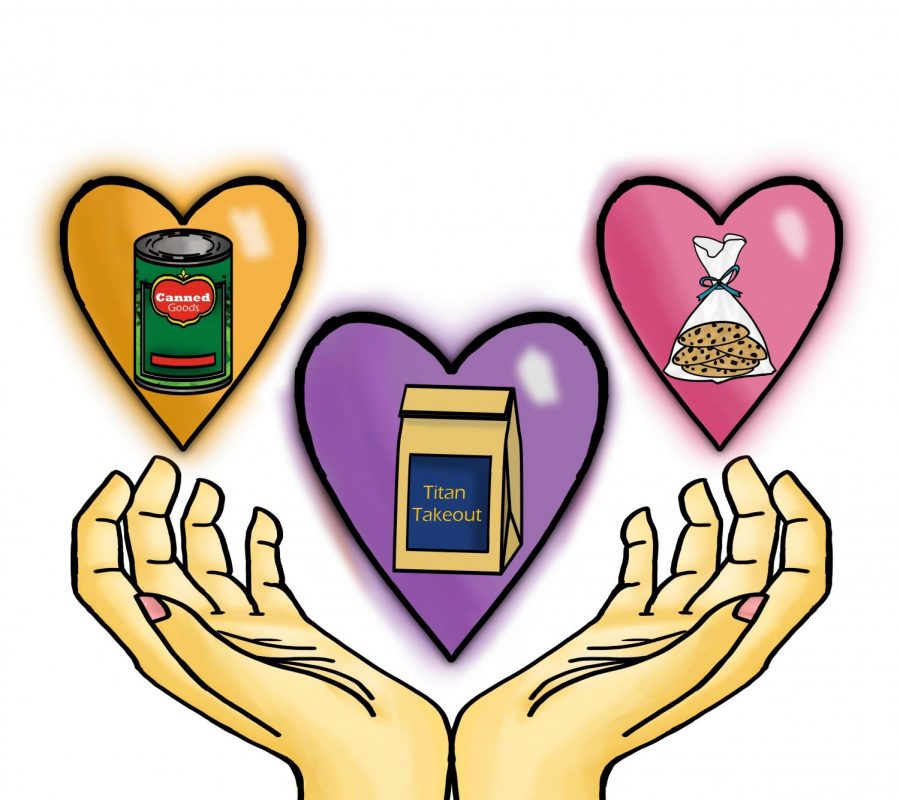 Sophomore Eliana Pritikin starts her day bright and early, clambering out of bed at 6:30 a.m. on a Sunday. Eight hours of whisking, blending and mixing await, but even after a full day of baking, she does not get to rest until 6 p.m. after selling and distributing all of her sweet-tooth enticing homemade goods. This is all part of her regular routine for the organization that Pritikin runs herself, Goodies for Good, where she sells pastries to raise money for charity.

Nearly 46 million people rely on food pantries to feed themselves, reported a 2014 study by Feeding America. Because most charities and relief organizations rely on volunteer work and donations, service projects are incredibly important, Jill Brickman, the Northfield Township Supervisor, explained. In addition to Pritikin’s project, senior Will Olsen and junior Simia Jester also contribute to the community. Jester started a donation collection project, which  raised over $3,500, and Olsen worked to organize a program to serve lunches to South students in need with his program, Titan Takeout. In the Chicagoland area, there are over 800 families utilizing the Northfield Township Food Pantry’s services at any given point, Brickman said. Because there are so many people that rely on them, community members’ donations and service are the backbone of the food pantry.

Pritikin started her organization because she had more free time during quarantine and wanted to find a way to help others through the difficult global pandemic. She expressed that she has always loved to bake and decided to incorporate her hobbies into a service project.

“I wanted to do something bigger and help raise the spirits of my community while also supporting local charities in Glenview and Chicago,” Pritikin explained. “So I decided to combine my love of baking with my desire to make a difference, and I created Goodies for Good.”

To start, Pritikin researched different types of service projects and eventually began developing her organization. To raise awareness, she said that she created several social media accounts on Instagram and Facebook to raise awareness for her organization and allow customers to contact her in order to place orders. Then, customers would pick up their pastries in a low-contact exchange. In total, Pritikin said she raised over $1,800, which she donated to charities and organizations like Lurie Children’s Hospital, the Northfield Food Pantry, the Anthony Rizzo Family Foundation and more.

“Because of [the pandemic], I really learned to appreciate my own health and wellness, along with the health of other people around me,” Pritikin said. “So I wanted to make sure that I donated to organizations who were helping other people with their own [wellbeing].”

Similarly to Pritikin, Olsen wanted to help people affected by the Covid-19 pandemic. He created a project called Titan Takeout, which provides lunches that South students and families in need can pick up directly from the school.

“It’s an outlet for students who [get] free or reduced lunch, or don’t necessarily have sources of food at home, where they can come in and grab a meal and take it home,” Olsen said. “Then they won’t have to worry about getting a meal [when they need it].”

Olsen said he was inspired by an online advocacy class that he took at Northwestern University, which tasked him with creating an action plan to help his community in some way. To develop his plan into a tangible project, Olsen explained that he worked with teachers and administrators at South to flesh out the details and advance Titan Takeout.

“I pitched the idea [to several administrators] and they gave input on how we could actually do it,” Olsen said. “[They helped with] things like where to house food, how people would find out about it, and how it would function. They basically told me ‘This is how we can make that happen based on other programs that we’ve had before.’”

Titan Takeout was implemented at the end of the 2019-2020 school year, Olsen explained, but it was temporarily shut down when school closed because of the pandemic. This year, he plans to continue the program with modifications to ensure it is safe, as well as expanding it to make it a better experience for those who use it.

“When we introduce it again this year, I’m thinking of doing a feedback form to see what different food [people who participate in the program] would like to be added, or ways that it could be improved,” Olsen said.

Overall, Olsen believes that it was very gratifying to be able to give back to t was able to see proof that he was helping people.

“The first time I came in to restock items, there were way more [meals] gone than I had anticipated,” Olsen recollected. “It had only been going for a few weeks, and I was amazed that people had already heard about it and [they] were already using it. I was blown away that I was able to help people that soon.”

Like other South students, Jester saw the need in the Chicagoland area for resources during quarantine. With her free time, she decided to start a project to raise money and donations for multiple organizations, including the Pilsen Food Pantry, Lakeview Food Pantry, Chicago Food Depository, Auburn Gresham WIC Office and more.

“Since the pandemic, it has been a good thing to give back to the community,” Jester explained. “I feel like I had a lot of free time on my hands so I decided to start something to help people.”

Jester started her project in the middle of June and continued to raise donations through the end of July. In order to begin receiving donations, Jester explained that she spent hours making and distributing posters throughout her neighborhood and after a couple of days the donations flooded in, including canned foods, clothing and monetary donations. One of Jester’s most memorable experiences was buying more donation supplies with donated money.

“We had five big grocery carts in Walmart and they were all full of different supplies,” Jester recollected. “We looked kind of crazy but it was nice going to the cash register and having them [see] how much we helped people.”

Jester has continued donating throughout the school year by donating 50 lunches a week to charities, and she plans to expand her project around the winter holidays. One of the most fulfilling parts of her experience was seeing the joy that her donations brought others.

“When I saw people’s faces when I brought the [donations, and got to see] how happy they were, [I realized] that I like helping people,” Jester stated. “They get a happy thing and you just feel good about it.”

The service projects of Pritikin, Olsen and Jester are three of many student-led service projects that work to help members of both local and national communities, according to Brickman. Service projects are crucial to institutions such as food pantries that rely entirely on contributions and donations, Brickman explained. Because most of the usual volunteers at the Northfield Township Food Pantry are retired and high-risk for Covid-19, when the pandemic started they had very few volunteers who were able to help with an increased need for aid from the community. Without high schooler volunteers and contributions, the pantry would have had great difficulties helping those in need of their service, Brickman said.

“We’d have been in a world of hurt without high school students stepping up, because so many of our volunteers are retired who, just by virtue of their age, are high-risk and were unable to come in,” Brickman said. “We had more work than ever and fewer people, and what we found was [when] the word got out among high school students, and we ended up not having enough volunteer slots for all the people that wanted to help.”