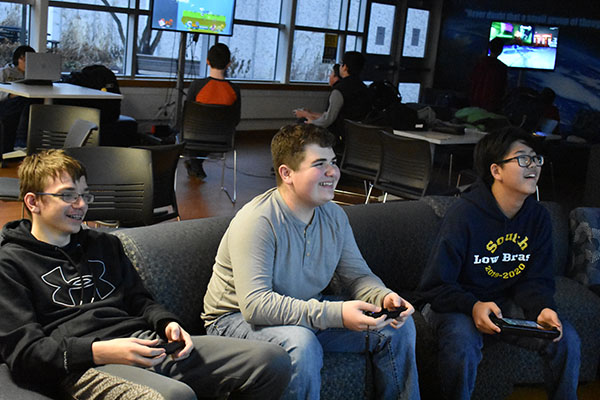 Sophomore Kate Ostrowski sits immersed in a game of Counter Strike while strategizing with her teammates. As they chat, one of her teammates notices that she is a girl and immediately begins writing that Ostrowski must not be a very skilled player and should go back to the kitchen where she belongs. However, Ostrowski will not let the hurtful words get the best of her and holds her head up high as she mutes the chat and continues playing.

Having played video games for six years, Ostrowski is used to sexist comments made by other players in the mostly male-dominated games she plays, she explained. While she recognized that it is easier for bullies to make crude remarks when they are not face to face, she said that this also makes it easier for her to block them out.

“Usually, I just mute [the people who make cruel remarks]; I don’t engage because after a while you get used to it,” Ostrowski said. “Sometimes there are things that people say that really hurt, and it’s hard to not fire back at them, but there’s enough toxicity in the world and I just try not to contribute to it.”

Breaking stereotypes surrounding what it means to be a gamer, freshman Allie Pines explained that not only is she a girl gamer, but is also a member of both Poms and the lacrosse team at South. Pines expressed that people are often shocked to hear that she even owns an Xbox, let alone plays video games several times a week. She worries that the media has given video games and those who play them a negative connotation, but she hopes people will realize that it is just a hobby like anything else, she said.

“[ideo games] aren’t all as bad as social media makes them seem,” Pines said. “Social media can glorify even the tiniest negativity about something and I think since people are so into social media that it has influenced our view of video games instead of just informing us of what’s going on.”

Junior Aubrey Palaganas agreed that there are people who say negative things while playing video games. Nonetheless, she believes it can be blown out of proportion and make people feel like all gamers are cruel. Palaganas explained that more often than not, the video game community is one in which she feels safe and comfortable, and that, like any community, it has both good and bad people.

“I have seen people ‘rage’ and say really mean things, and that can be an average thing for video games; there’s always going to be that one guy who’s going to ruin it,” Palaganas said. “But I feel like a good part is that there’s a community of people that you can talk to. Most of the people that do ‘rage’ don’t even have friends on the games, so they’re kind of alone and that’s why they feel so defensive.”

Joseph Mulloy, special education teacher and sponsor of South’s Gaming Club, does not believe video games foster violence among players, he said. Mulloy said the students and even adults he knows who play first-person shooter games have a keen sense of fantasy versus reality and would never do what they do in the games in real life. Despite this, Mulloy explained that he does not think the violence in video games have no consequence on people.

“My one problem with video games that are more violent is I think it can foster a numbness to violence where seeing it doesn’t affect you quite in the same way that it should,” Mulloy expressed. “But I don’t think it creates any more violent people than anything else.”

Palaganas fears this negative outlook on video games has discouraged people from playing them or being associated with those who do, she said. She believes if someone is enjoying themselves while playing a game, they are a gamer and should not feel any shame about it, she concluded.

“I [have played video] games my entire life and I feel like there’s negative and positives, but as long as you love it and you’re not hurting anyone, then you’re completely fine,” Palaganas stated. “You’re just like anyone else.”