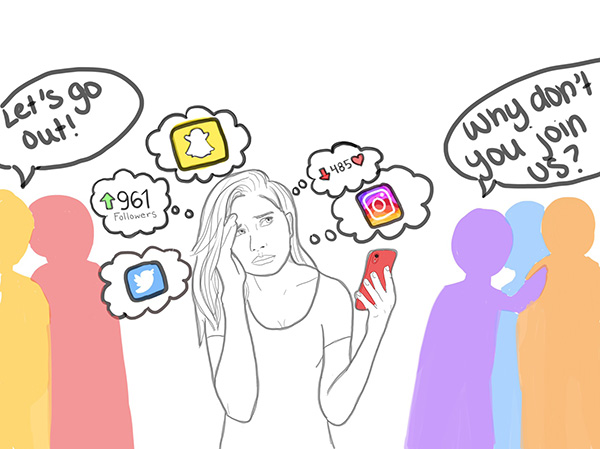 Happier, according to a 2017 article called “Have Smartphones Destroyed a Generation?” published in The Atlantic. Teens who spend more time looking at screens are more likely to report symptoms of depression than other teens, according to author Jean M. Twenge, who wrote the article. Senior Ashley Davis, on the other hand, said that such a life would be completely and utterly unimaginable.

Social media is perfectly fine when used correctly, but society has reached a point at which technology is being used in destructive ways: it takes priority over schoolwork or even face-to-face contact with friends and family, Davis said.

The most significant problem of different social media accounts is the comparisons made to other people, Davis said. People believe they are being judged simply for what they are wearing, who they are hanging out with, or where they are going. Davis, among others, found herself spending too much time scrolling through Instagram and getting lost in posts, which left her feeling empty inside. People often look to social media with high expectations, but those results aren’t always reaped. This leaves individuals feeling disappointed and frustrated, according to Davis.

“I think [social media] creates a lot of stress because people compare themselves [to others],” Davis said. “You are only seeing people at their best. People don’t like to post pictures of themselves if they’re not looking their best.”

Similarly, junior Mari Keating has only ever known a life with Snapchat, Instagram, Twitter, Facebook and other social media platforms, which are public spaces where people can post and show others their accomplishments and successes.

Life without social media is unimaginable, but life without a phone? This seems like an impossible feat for any high schooler, but sophomore Sarah Kim did the inconceivable: she does not own a phone, though she still uses social media. Kim states that she is different because of her lack of a phone, but she wants people to know that it is possible to have a social life, friends, and life without it. However, Kim still feels the inevitable effects of social dilemmas on her life.

“There’s a lot of judgment,” Kim said. “A lot of people judge the way you look, the way you act, or what you post, and it’s distracting because I worry about what people think of me when I’m posting something, or what kind of thoughts they [have] if they see my post.”

Kim believes that social media is fake even though you can make a lot of “friends”: people you have never met. Instead of living your reality, you live in the realm of technology, so you cannot always tell which friendships are real, Kim said.  People post their entire lives on their “Finstas,” Kim said, which are second Instagram accounts used for sharing with a smaller circle of friends. Kim states that people only choose select moments for their actual Instagram, which is the main account that is followed by people who they do and don’t know.

Senior Jonathan Koh, however, addressed another major stressor caused by the media: “FOMO,” or the fear of missing out. While it is fun to keep up with your friends, technology has become a leading cause of stress, Koh said.

“When I post [a picture] I take at least 20 photos, and then choose the best one and [post that],” Kim said. “As pretty as it is, it’s not actually you, it doesn’t describe you, because everyone else has those kinds of posts.”

The danger of social media is not only understanding all the perspectives but you also don’t get the full experience of who a person truly is or their thought process, just by viewing through the lens of a single story posted on Snapchat, Instagram or another social media application, Davis said. A person is much more than that one post, Davis added.

“You don’t see the full story,” Davis said. “When you see something, you only see what people want you to see, and I think it gives people a false sense of what is going on.”