Peer Group influences the lives of both freshmen and seniors 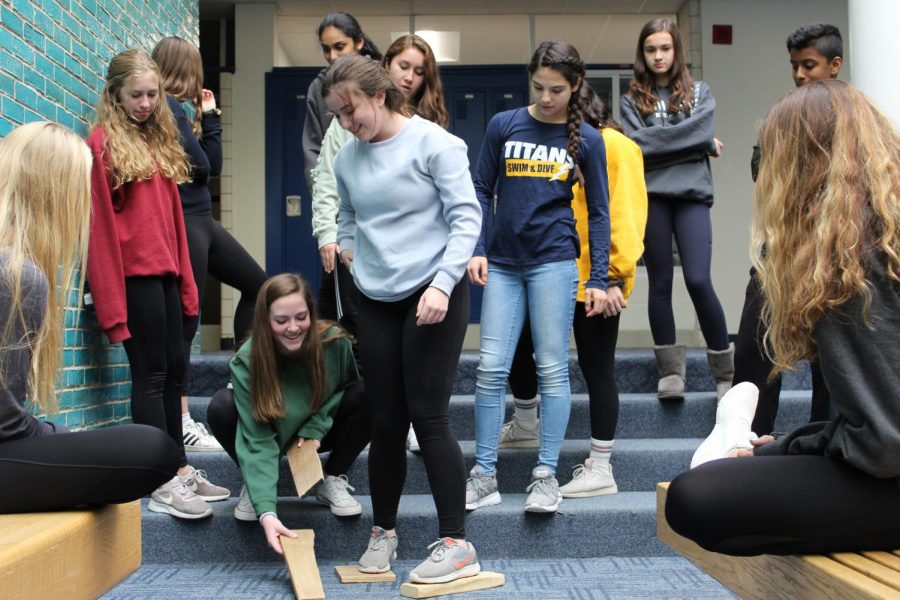 Senior leaders Julia DiSano and Mickey Brozek watch on as their Peer Group freshman engage with each other in one of the many activities they do each week.

Walking through the maze of hallways at GBS and being surrounded by many unfamiliar faces towering down on you can be overwhelming for freshmen. But when senior Peer Group leader Aditya Bhalla strides by, it’s like a ray of sunshine to the students participating in his Peer Group.

For freshmen, getting acclimated to a new environment can prove to be difficult. With the transition from eighth grade to high school, South offers students many opportunities to navigate the challenges they’ll face. Peer Group, a program meant to ensure the adjustment of incoming freshmen, has been operating at South for over 40 years, according to Bhalla.

“I wasn’t in Peer Group my freshman year, but I’d always see kids in Peer Group doing activities, which piqued my interest of having the opportunity to have an influence on freshmen who are just starting their time here,” Bhalla said.

“I want to study political science in college, so having that leadership experience from Peer Group and being able to lead a group is something that’s going to be really valuable for me in the future,” Bhalla said.

In the past, not all freshmen were able to participate in the Peer Group program, according to Joy Cooper, co-coordinator of Peer Group. Despite the class of 2022 being the largest Freshman class to attend South, the program ensures that each one is offered a spot. Cooper adds that this hasn’t increased the difficulty of serving students that want to participate either.

Matt Topham, co-coordinator of Peer Group alongside Cooper, explained the need for leadership and skills to work with other people. Once a senior leader, like Bhalla, becomes nominated to be apart of the Peer Group leadership team, they participate in a week-long workshop in preparation for the upcoming school year, Topham explained.

“It’s really great to see how the [seniors leaders] develop their skills,” Topham said. “We always have a really solid selection process, so we end up getting great, quality students that want to be there to help.”

Freshman Elizabeth Clary, Peer Group participant, explained how her new friends and Peer Group leaders created a fun environment. She wished she was exposed to Peer Group at a younger age, as it has provided her with a better understanding of communication. Clary stressed that Peer Group can help introverted students who need a community to grow socially.

Clary shared that her favorite activity was laughing and fooling around while doing a scavenger hunt around the school. She hopes to experience more of these moments in the future as a Peer Group leader and as a role model to younger kids as well. The relationships created with upperclassmen have motivated Clary to become a senior leader, as she knows they’re always there for her.

“What I enjoy most about Peer Group is the people and jokes we all make with each other because we have a ton of inside jokes that nobody understands but us,” Clary said. “[Peer Group] has affected me because I have another friend group that I know I can always fall back on.”

Participating in Peer Group can play a big part of a student’s experience during their first year of high school, Bhalla explains, as it can affect the most important social relationships in a freshman’s life. While senior Peer Group leaders can have an impact on the lives of freshmen, it also influences their own lives as well.

“It’s a meaningful experience not only for a freshman, but for a senior,” Bhalla said. “[Peer Group] is definitely an interesting dynamic to be with freshmen. It helps me reflect on who I was freshman year and how I [have] progressed through high school.”

However, the seniors aren’t the only ones that leave an impact, as freshmen can also influence the lives of their own leaders as well. Cooper touches on various events in the past that have allowed freshmen to rise up and support their leaders in times of need. These experiences help them gain a sense of community and also teach them to support each other.

“They were this little ragtag group of kids who should have never crossed paths,” Cooper said.  “They were from different backgrounds, in different classes, with different interests. They were just a random hodgepodge of kids in this room and they became such a good support network for each other.”