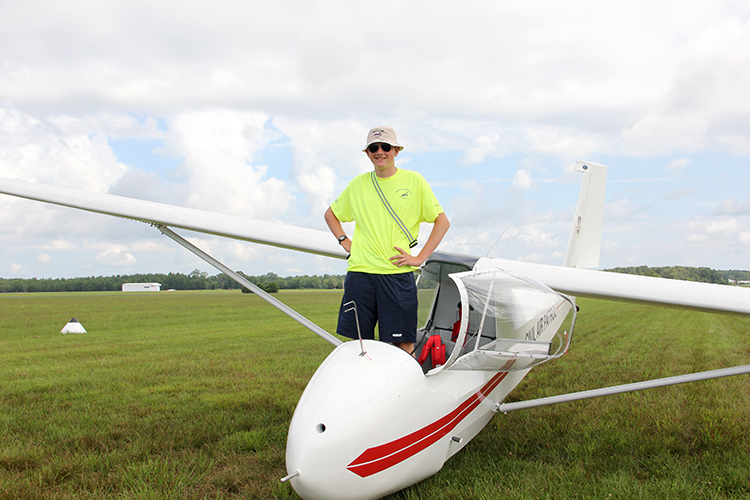 Flying a plane solo at the age of 15 isn’t usually considered “common,” according to Franklin Burbank, professional flying instructor of Citrus Soaring Club in Pierson, Florida. But this is a reality Franklin believes is slowly changing right before his eyes, as he educates one aspiring teenage pilot after another. Among Franklin’s handful of student pilots is sophomore Phillip Norton, who has big dreams of becoming a professional airline pilot in the future.

Sophomore Phillip Norton currently holds a student pilot certificate, which allows him to fly in a glider plane without an instructor. Norton remembers his first time flying solo in a glider plane. He says the minute he lifted off the ground, the glider felt lighter and more free.

“It was weird not having an instructor sitting behind me,” Norton said. “When I released [from the ground,] I was stunned because [I thought,] ‘I’m flying this and I’m alone’, and that was a great feeling.”

According to Norton’s father, Bruce Norton, Phillip has loved airports and planes since he was young. Bruce remembers Phillip’s first flight as a child, when he flew his cousin’s plane.

“We were flying in my cousin’s plane, and [we gave Phil] the controls for a little while,” Bruce said. “I was thrilled to see him getting connected to something he really likes.”

Phillip says he first became interested in flying after attending a summer camp as a 14-year-old. Phillip says it was then that he wanted to pursue a career in aviation. Through piloting, he has learned the importance of being attentive to common distractions, according to Phillip.

“[I’ve learned the importance of] being aware of one’s surroundings,” Phillip said. “My first time in a powered plane I was looking around in the air and the instructor [told me] that we were flying towards an antenna … I was surprised when [I noticed] I wasn’t paying attention.”

Phillip believes there is a great feeling of elation while flying solo. He says he loves the freedom and the ability to explore the world from his very own pilot seat.

“One of the most appealing aspects of flying would be the temporary loneliness and the release from earthly concerns,” Phillip said. “The most inspiring aspect would be the sound rushing over the wings and cockpit.”

According to Burbank, youth enrollment in aviation programs has been slowly increasing over the years. Burbank says he has had students anywhere from ages 8 to 95. He says his favorite part of teaching is watching students grow.

“I’ve watched students of mine go from their first flight to becoming flight instructors so that’s a pretty cool progression,” Burbank said.

Phillip is currently training for his glider pilots license, which will allow him to fly alone with passengers of his choice. He hopes to continue pursuing aviation in college and later becoming a professional pilot. Bruce says he has the same hopes for his son, and advises him to continue to cultivate his ambitions.