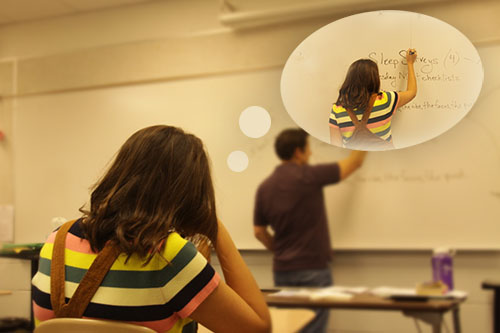 It’s no secret that South is filled with many former students who come back to become teachers in the same classrooms they grew up in. However, most don’t know a number of these GBS graduates now work alongside their former teachers. From generation to generation, new teachers are inspired by their prior mentors and attempt to keep the learning environment spunky and fresh with their own modern styles.

“She was an amazing student machine when she was here, just churning out the work,” Hussmann said. “That particular year, her AP U.S. History [class] was among the smartest groups I’ve ever taught.”

Hussmann noted, when reflecting on the differences that have been made in his teaching style since teaching Ekstrand, that now he tries to ask his students more questions during teaching.

“I’d say there are a lot of consistencies”,Hussmann said. “I now try to ask a lot of questions about the ‘whys’ of  history and not just the ‘what.’ Back when I taught Ekstrand, social studies and English classes were only 40 minutes “we did a lot of straight lecture” Hussmann said.

Ekstrand believes she chose to teach history because of the influence her social studies teachers had on her. She remembers the passion they showed for the subject and how they truly believed in the importance of learning about the past. Ekstrand recalls the energy in Hussmann’s classroom and her excitement to go to class.

“You never know what to expect [in Hussmann’s class],” Ekstrand said. “He is so knowledgeable and such a great lecturer. I just loved going to his class, taking notes, asking questions and engaging in great conversations.”

According to Hussman, his advice for all former students becoming teachers is to realize the growth of their school, and the changes that have occurred since they attended as students.

Ekstrand later taught David Berkson, another GBS graduate and current social studies teacher to find his own style. Ekstrand encourages Berkson to discover his own sense of identity in the classroomsaid “rather than try to emulate the teachers of his past,” said Berkson.

“Be yourself, and find who you are in the classroom; … if you’re trying to imitate somebody else, it’s not gonna work,” Ekstrand said.

“I was really learning in that class, not just for a test or for points but actually like I’m becoming smarter,” Berkson said.“I was becoming more in tune with [what was] going on in the world. [It’s] a cool feeling and a reflection of good teaching.”

Berkson says he has learned from his former teachers that it’s okay to make mistakes in the classroom. He believes the hardest part of teaching is showing up every day and putting forth his best effort for the good of his students.

“Being a teacher is not about being perfect,” Berkson said. “It’s about putting in the effort, being prepared, and doing your best. You can make a mistake, but [there’s no room for] a bad day, [that’s] the hardest part about teaching.”