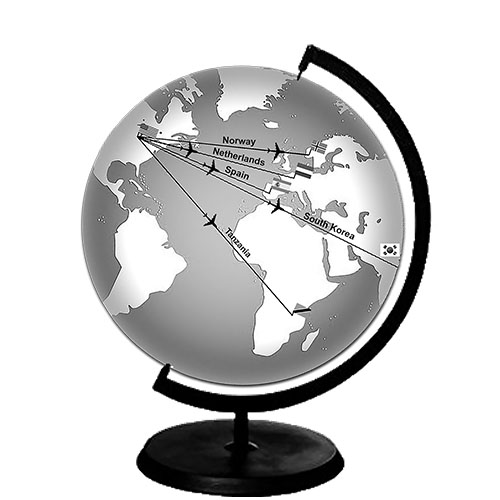 For months, minds have been venturing, thinking of dreamy lands far from Glenview. In a world of 196 countries and 7,000 languages, there is no shortage of captivating destinations or people who crave adventure and yearn to cross over the great blue abyss.

Senior Bryce McClanahan has his heart set on Africa. Not only does he dream of visiting Mount Kilimanjaro and going on animal safaris, but he also wants a worldlier perspective.

“I really want to go to Tanzania because I feel like we are trapped in this Glenview bubble,” McClanahan said. “I need some perspective and to be able to [meet] with people that aren’t as fortunate as I am to really understand the world.”

Similar to McClanahan, senior Maddie McMillin is in search of an enriching experience overseas. With a great passion for Spanish, McMillin would like to continue her exploration of the language in its country of origin.

Senior Sean Jung, who ventured to France during the 2016-17 student exchange trip, says the trip gave him the confidence to broaden his travel horizons. He now has his sights set on the largest continent of all.

“If I could go to any country, it would be South Korea because my parents are from there and I’ve never had the chance to go,” Jung said. “My grandparents would offer for me to go [in the past], but I never really wanted to because I hadn’t traveled yet. Now that I’ve traveled to France […], on the exchange trip, I think it would be really nice to go [to South Korea] and see some family.”

In addition to Jung, senior Grace Solem would also like to familiarize herself with her roots. Solem, who has a passion for ice fishing, has her eyes on traveling to Northern Europe.

“I think it would be really cool to travel to Norway or somewhere in Scandinavia after high school,” Solem said. “It’s where my ancestors are from, and I just think it’s a really beautiful land and the culture is a lot different.”

Senior Maggie Flowers, who traveled to London during 2015-16, would like to return to Europe. After reading The Diary of a Young Girl, a book of the writings of Anne Frank during the Nazi occupation, Flowers has wanted to learn more about this by traveling to Anne Frank’s home in Amsterdam.

“I really like Anne Frank, and I’ve always wanted to go to the Anne Frank house, which is located in Amsterdam,” Flowers said.

According to Flowers, traveling has a wealth of benefits, one of which is its humbling powers.

“You get a [worldlier] perspective, and I think you learn how to better appreciate people around you even if you may not have direct contact with them constantly,” Flowers said. “I think that’s really important.”