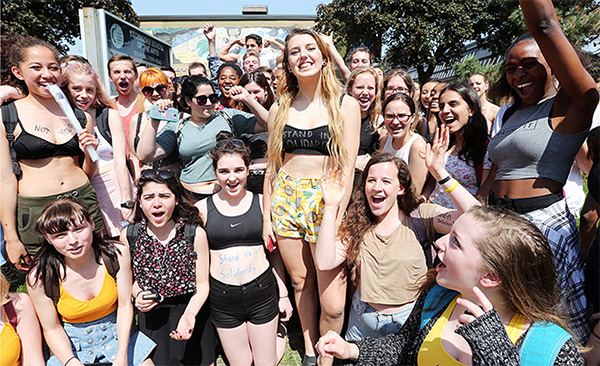 STANDING IN SOLIDARITY: Wearing crop tops in defiance, students at the Etobicoke School of the Arts in Toronto protest their school’s “sexist” dress code in May of 2015. This particular instance is just one of many, as an increasing number of schools begin a debate over the controversy surrounding dress code policies.

The hallways, a blur of different colors and styles, are crowded with students who showcase their identities through their clothing. Even with the enforcement of a school dress code, there have been few recorded instances of dress violations. According to Dean Ronald Bean, only two dress code referrals were made in the 2014-2015 school year. However, some students feel the policy both limits their freedom of expression and can be subjective.

The official dress code policy for the Glenbrooks is created by the Board of Education. The handbook states that appropriate clothing “promotes self-respect, balances social responsibility with self-expression and is free of distracting, disruptive, threatening or offensive diversions from the educational process.” According to Superintendent Dr. Mike Riggle, clothing must provide reasonable coverage along with no reference of drugs, alcohol, tobacco, violence, gang symbols or anything that could contain a double meaning.

“Students ought to be able to wear a lot of different things to school that they feel is important to them so that they’re expressing their thoughts, their ideas, their feelings, so that they’re dressing according to the fashion that they feel fits them,” Riggle said. “But at the same time, [the policy is] saying, ‘But you live in a part of a larger community,’ so it needs to be in a balance with social responsibility.”

Despite the intentions of the policy, junior Devin Rachiele believes the dress code is subjective in determining what is appropriate. According to Rachiele, she experienced this when she was allegedly asked to change by a dean in May 2015 for wearing a crop top and high-waisted pants. She later posted on Facebook about her experience, declaring that her incident was both unfair and sexist.

“I’m upset because I cannot dress how I feel [and] it was my fault boys were distracted in class, even though I have no control over that,” Rachiele posted. “I am not a sexual object; I am a human. I love my body, maybe I want to show it off, and it’s not for you. It’s for me.”

Agreeing with Rachiele, junior Dahlia Maleh also feels the Glenbrook dress code does not treat men and women equally. According to Maleh, she protested the dress code during homecoming’s Toga Day by wearing a “Free the Nipple” shirt, which opposes the stigma towards women who choose to go topless.

“The [reason] why I wore the ‘Free the Nipple’ shirt is [because] I hate Toga Day at our school […] because guys are allowed to not wear shirts [under] their togas and girls, of course, have to wear a shirt because that would be crazy if we saw a nipple,” Maleh said.

Recognizing some students feel the policy is unfair, Riggle states that the majority of Glenbrook families support the dress code, shown by school climate surveys receiving minimal to no complaints about the policy. Additionally, Riggle believes students must consider the environment they create by wearing specific clothing, stating it is the student’s job to adjust his or her clothing so others feel comfortable.

“If [a student expresses] to you that they’re uncomfortable with what you’re wearing, you know it’s their environment too,” Riggle said. “And that starts the conversation: What is too revealing to one person, the person who’s observing it, may be a little bit different than the person who actually is wearing it.”

In contrast to Riggle’s beliefs though, Maleh feels that clothing should be an individual choice. A supporter of students’ freedom of expression, Maleh thinks clothing appropriateness should not be measured based on community opinion.

“It’s really ironic because you walk around the streets and you see these huge posters of females’ bodies completely uncovered, sexy, and if you’re selling a product, it’s okay,” Maleh said. “But when I, an independent woman, want to walk around like that, I’m objectified. It’s not okay. I’m slut shamed [by others] […]. It’s just such a double standard.”

It is not only girls who believe that clothing deemed distracting is an unfair reason for being told to change clothing; senior Patrick Szczerbowski agrees with Maleh that a student should not be asked to change because others are preoccupied with his or her clothing.

“There is some clothing that […] I’ll pay more attention to or will catch my eye, but I wouldn’t go as far as to say, ‘Sorry, you can’t wear that; I can’t stop looking at you’,” Szczerbowski said. “That’s not exactly their fault. I think it’s more so on the guy or girl to focus more [on school] […]. To say that you can’t wear that because it’s kind of distracting is a little ridiculous.”

However, junior Nicole Cairns believes school should not allow clothes that are too revealing. According to Cairns, women should respect societal rules by covering their bodies while in class.

“If it’s not modest enough, it just shouldn’t be worn at school,” Cairns said. “I know that girls have stricter dress codes because there is obviously a higher standard for girls, and what should be worn is considered more conservative or modest.”

Furthermore, student athletes also must conform to dress code regulations. According to Athletic Director Steve Rockrohr, the Athletic Department’s policy is determined by the coach of each sport. In the case of the women’s cross-country team, Coach Fred Kocian created a dress code where the team must wear a full length shirt and shorts.

“My dress code is based on what the state rules for our competition,” Kocian said. “You need a singlet and you need shorts, so I think that’s at least what we’re going to wear for practice because that’s what we have to wear in meets, so we should learn how to practice the same way.”

Kocian believes his dress code is fair because it is consistent amongst his team. However, Mallory Davidson*, varsity cross-country runner, believes it’s sexist that the men’s cross-country team is allowed to practice without their shirts; whereas, the women are not allowed to run in a sports bra. Davidson claims that one of her coach’s reasons is that sports bras would be distracting to both men and the community, which she deems unfair.

“I feel [the policy is] definitely a little sexist because [the cross-country coaches] claim it’s distracting, but it shouldn’t be distracting that someone’s exercising,” Davidson said. “It’s not provocative if you’re just exercising.”

According to Kocian, the team’s dress code must respect the community’s opinion, and 15 years ago the community complained about the girls running through the neighborhood in sports bras. Although Davidson believes the team’s clothing should not be limited by public opinion, Kocian feels it is important to support societal beliefs.

Although the dean’s office does not regulate athletic dress codes, Bean acknowledges that subjectivity can exist overall based on who is creating and implementing it. In spite of this, Bean believes the handbook’s definition minimizes the risk of subjectivity.

“I think, whether it’s a conservative teacher or a liberal teacher, […] the guidelines that we’re going to use is what the handbook says,” Bean said. “So as we have conversations with students, it’s not based on a conservative or a liberal teacher’s views; it’s based on ‘[…] What this student is wearing or presenting, is it supported by the dress code or is it not supported by what the dress code says?’”

Maleh believes that flaws exist in both the Glenbrook dress code and the school environment enforcing the policy. With this in mind, Maleh believes the best approach towards reducing subjectivity is to educate the community about body positivity and the objectification of female bodies.

“I’m not saying, of course, that we should be able to come to school shirtless or anything like that,” Maleh said. “It’s just making a point [that] that’s the bigger picture. The smaller picture is my body is getting looked at differently than a guy’s body, and that’s not fair.”