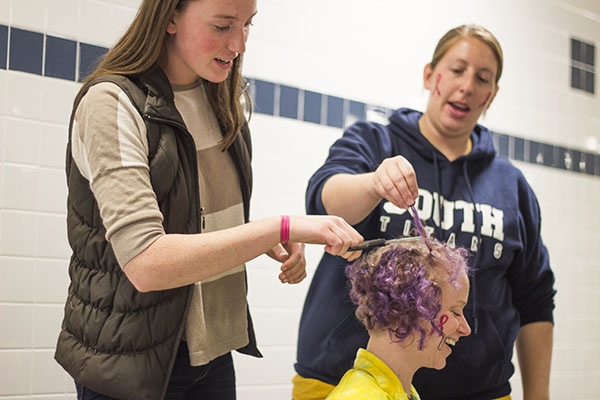 Throughout the last week in October, South’s community came together to fundraise for science teacher Linda Kocian. Kocian was diagnosed with Multiple Myeloma, a type of blood cancer that affects plasma cells, near the end of this past summer. Cure Club, Japanese Club, TV and much of the student body worked together for many fundraising events in order to contribute to Kocian’s medical expenses.

According to Deborah Stein, Cure Club sponsor and science teacher, the fundraising events included selling “Fighting Titan Spirit” t-shirts, folding 1,000 paper cranes and shaving science teacher Jennifer Friedmann’s head. Each event supported Kocian in a specific way. While selling the t-shirts and shaving Friedmann’s head primarily helped raise money, folding the 1,000 cranes was a different type of support. A Japanese legend says that 1,000 cranes will grant a wish, Stein said. The cranes were a way to get all of South involved in showing Kocian that she is in everyone’s thoughts.

“We want to send her positive messages… just to let her know we are thinking about her… and that we love her and miss her and we are fighting for her and just to encourage her to keep on fighting,” Stein said.

As a way of showing her support, Friedmann decided to shave her head on Friday, Oct. 31. During all lunch blocks, she sat on a stage in the cafeteria and allowed students to cut off a lock of her hair or shave a part of her head, depending on how much they donated. By the end of all lunches, her curly hair, that had been dyed purple for Halloween, had been completely cut off.

According to Friedmann, there are many different reasons why she decided to shave her head for Kocian. For one, she and Kocian have always “clicked” about their naturally curly hair, and Friedmann sees it as a fun point of connection and bonding in their friendship, she said.

“I bet it feels really awful, especially if it’s not your choice, [to lose your hair],” Friedmann said. “I [wanted to shave my head] so that Linda [would] not be the only woman with extraordinary hair in the building who had suddenly changed her appearance. And I [wanted] to choose to do it as a way of empowering Linda, since she doesn’t have a choice. And I [wanted] to do it because as beautiful as Linda’s hair is, it’s not who she is as a person… She is something rare and amazing and totally untouchable by cancer, and that is what I value in her and what she inspires me to value in myself. And then I thought, ‘I bet people would pay to see me do this.’”

In addition to fundraising, Cure Club worked together with TV students in order to make a video filled with messages from students and staff and coverage of the fundraising events.

According to junior Nicole Schreiber, Cure Club board member, Cure Club would not have been able to achieve their goals without  the collaboration of some of South’s other clubs.

“It was amazing to have the support from other clubs and groups for this cause,” Schreiber said. “Every group brought something new to offer, and [Cure Club] needed as much help as we could get. Without the others, it would have been difficult to reach our goals folding cranes as well as selling T-shirts.”

As the events unraveled throughout the week, it was a goal of Stein’s to keep them a secret from Kocian. She even went as far as to call her and tell her to delete a message from her email inbox that might give some things away, Stein said.

Kocian still does not know about the fundraising events, including Friedmann shaving her head.

“I actually haven’t told [Kocian]… The time just hasn’t been right yet,” Friedmann said. “We texted, but I didn’t want to tell her on the phone. She might find out from the GBS TV video, or if she’s feeling more up for visitors this week, I will tell her when I see her.  I think she’ll probably just roll her eyes at me, she knows I’m crazy. I’m hoping it will make her laugh; I love cracking her up.”

Cure Club plans to surprise Kocian with the 1,064 cranes, the video made by TV and the money that was raised in the very near future to show their support and send her positive thoughts.

Also to show their support, many of Kocian’s former students were very involved in the fundraising process.

Sophomore Haylie Routburg was in one of Kocian’s biology classes last year. Routburg was shocked and upset when she first heard about Kocian’s diagnosis. She wanted to help with the fundraising process in any way she could, she said.

“I helped fold cranes and taught others how to fold them,” Routburg said. “I sold t-shirts as well. It was really fun helping out and working with the Cure Club.”

“She is an amazing woman who always puts her students before herself and cares for everyone around her,” Schreiber said. “I am so grateful to have had the chance to help raise funds and support for this amazing, strong woman. Ms. Kocian will forever be in my thoughts and prayers; nobody deserves to have to go through what she is currently battling.”

Schreiber is not the only person who recognizes the positive impact Kocian has had at South.

“She is thoughtful, very conscientious and very hardworking,” Friedmann said. “She is kind, patient, understanding and funny. She is always looking for a better way to do something; she is never satisfied with past success and is always looking for ways to improve her work, her life and her outlook.”

Friedmann also noted that Kocian always has a good attitude, no matter the circumstances.

“When the chips are down, she never fails to find the positive in a situation,” Friedmann said. “Even now. She quietly, graciously, lovingly and with humor changes lives for the better: the kids she teaches, her own family, her colleagues and friends.”

Due to Kocian’s strong connection to South, Schreiber felt that this fundraising campaign was different than others that Cure Club has participated in.

“This fundraising campaign differs from others that Cure Club has done in the past because one of our own Titan teachers has been affected,” Schreiber said. “For this campaign, it was greatly centered on what we, as a school, could do for Ms. Kocian. It was amazing to see all of the support we got from GBS teachers and students who came out to buy a shirt or fold a crane.”

Overall, South’s community coming together and supporting Kocian was something that is incredibly valuable.