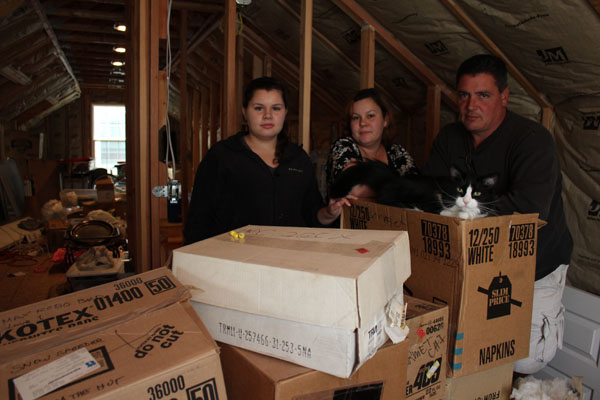 Contaminated water. Frequent water outages. No working fire hydrants. Potholes that wreck car tires. These are perhaps not someone’s first associations with the Glenview community, but add in rising rent costs, displaced families and looming foreclosure, and this is reality for residents of Glenview’s Sunset Village mobile home park, some of whom are South students.

According to Anita Noel, secretary of the Sunset Village Residents’ Association, devastation has occurred in Sunset Village on many levels. The rising rent costs have resulted in the displacement of over thirty families, many of whom have had to pull their children out of Glenview schools.

“We don’t know where those families are living today because Sunset Village truly was one of the few affordable housing options in Glenview,” Noel said.

Sunset Village also suffers from poor management, according to Mike Vilches, president of the Sunset Village Residents’ Association. Vilches noted that the mobile home park has elevated levels of radium in its water, as the park is on a well system rather than the Glenview water system. According to the Village of Glenview, the Village has no authority to regulate the water or how it is supplied.

Senior Omar Alcocer, who lives in Sunset Village, is appalled by the water situation in his neighborhood.

“The water isn’t even clear sometimes,” Alcocer said. “It’s yellow, and I take a shower in that. I use that water to wash my hands.”

The park experiences frequent water outages as well, according to Vilches, in which residents go two or three days without water while the infrastructure is being repaired. The park also lacks any working fire hydrants, an issue the Glenview fire chief is helping to rectify with a plan that involves bringing in water from other locations.

According to Communications Director Lynne Stiefel, throughout the late 2000s, the Village talked with management of the park about many safety concerns. While some of these concerns were taken care of, the water system was not, resulting in several Illinois EPA violations. In 2008, Cook County no longer took jurisdiction of the mobile home park, changing its policy so that Glenview’s building, electrical, plumbing and other life-safety codes applied to Sunset Village.

The Village eventually adopted a manufactured home licensing ordinance. They attempted to enforce this by issuing daily tickets regarding the water pressure in the park. In March 2009, a settlement was reached in the Cook County Circuit Court which called for Capital First Realty Inc., which owned the property, under the direction of CEO Richard Klarchek, to complete installation of a new water system, make improvements to the sanitary system and repave existing streets.

The owner took no action to advance compliance, however, and the settlement agreement was then put on hold October 2010 when Klarchek filed for Chapter 11 bankruptcy.

As conditions in Sunset Village worsen, some families have moved out willingly while others have been forced out. Chris Iosello, Sunset Village resident and father of junior Sydney Iosello, witnessed the public auctioning of mobile homes off of the property in mid-August, an experience he found both shocking and frightening.

Chris described a man in an enclosed glass “pope mobile” using a loudspeaker to auction off mobile homes in Sunset Village. Chris claims the police were escorting the auctioneers throughout the neighborhood.

According to Vilches, many residents were evicted from their homes because the bank wasn’t receiving the checks being sent to Sunset Village. He believes Klarchek was pocketing the money he was supposed to pass through to the banks. Consequently, when Sunset Village went into foreclosure, residents had no proof of their payment to Klarchek and were forced out of their homes by the bank.

“There has, in our opinion, been one man, [Klarchek], who’s been enriched at the expense of the finance community, the housing community, the community at large,” Noel said. “The devastation is in no way justifiable.”

A representative from Capital First Realty Inc. declined an interview but said over the phone that Klarchek and Capital First no longer have any control over the property. Capital First refused to provide contact information for Klarchek.

A representative from the Village of Glenview claimed that Klarchek’s actions did not involve the Village at all.

Lincoln Financial is the current note holder on the property, according to Vilches. A representative from Lincoln Financial declined to comment on this pending legal matter. Vilches noted that a Receiver, Steven Spinell, has been hired by the courts to run the property and list it for sale.

“Currently the property is listed,” Noel said. “We are told there is going to be a 90 day marketing period. So within the next 90 days we will either survive and succeed or we will face demise and destruction.”

Laws don’t prevent developers from taking over the property and forcing residents out within a year with no financial reimbursement, according to Chris. This uncertainty has caused stress for families like the Iosellos.

“You don’t know if next week may be the day they say, ‘Everyone out,’” Chris said. “[…] Our house is full of boxes because we want to be ready for when that day comes for us to leave.”

Students face challenges regarding their education as they fear they may have to move out of the district.

“I worry about not finishing school here because I don’t want to switch schools during high school because that’s the hardest time to adjust,” Sydney said.

In an attempt to take control of their futures, Sunset Village residents would like to make a cooperative purchase so that the residents own the park and have jurisdiction over their community, according to Noel.

“[Sunset Village residents] have a different relationship with each other, and this community can be one of the most amazing communities within Glenview,” Noel said. “We ask [Glenview residents for] help to make that happen.”

Residents hope to preserve Sunset Village as an enclave of affordable housing, one which can contribute positively to the Glenview community as a whole. As Sunset Village residents look to the future, they call on the community to help change the way they live and end the stigma they feel they live under.

“The only time we’ll see a future is when we’ve finally gotten everything together, so that we can purchase the park with the help of the community and become a part of the community that’s no longer ridiculed or scorned or thought little of because there [happen] to be wheels under our houses,” Chris said.