Featuring a live audience: the first time in over a year 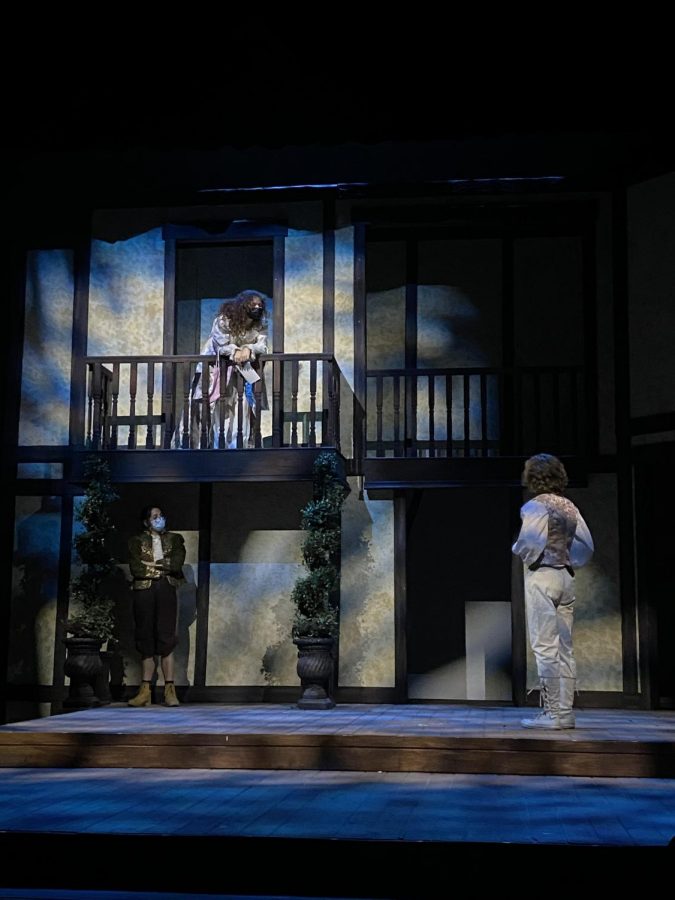 The experience of seeing a story unfold in front of your eyes, and knowing that the exact moment cannot be perfectly captured or recreated, is what makes live theater special.

This feeling is what sparks excitement around South’s fall play, Shakespeare in Love—the first theater performance South will have with a live audience in over a year. Showing in the auditorium Oct. 21-23, director and drama teacher Claire Drews believes that the fall play poses an opportunity for students and staff to detach from their busy lives and immerse themselves in a comedic, fictional love story.

The play follows Shakespeare’s writing journey of Romeo and Juliet through his fictional relationship with his muse, a woman with hopes of becoming an actress in a patriarchal society. Set in Elizabethan England, Shakespeare in Love is described by Drews as a unique period piece that includes a variety of fun elements.

“I came across this play, and it stood out to me,” Drews said. “There’s a ton of comedy, sword fights, obviously love, and larger-than-life characters.”

Senior Sloan Greenfield, who plays Shakespeare’s best friend and mentor, Kit Marlowe, described the tight-knit community of theater as an escape from reality that has helped her form unbreakable bonds with her fellow performers.

“[Performing has] been a safe space,” Greenfield said. “All my friends are in theater, and we have been doing this together since we were freshmen, so we [work] really [well together] on stage.”

Along with the hard work of the cast, the play would not be complete without the contributions of the Stage Crew. From building the sets to operating light cues to running the show backstage, the Stage Crew plays a crucial role in theater, stage director Rich Winship explained.

“[The students have] the energy and work ethic to get the job done, and they take pride in the individual tasks they accomplish each day,” Winship said. “I enjoy the process [building of set] more than the actual production; seeing it go from nothing to this beautiful set and knowing that these students have created all of it is fantastic.”

Stage Manager senior Sami Duby explained that a specific addition they constructed for the set is a raised platform. This smaller stage, constructed of metal and wood platforms, is placed on the actual stage to allow on-stage seating around the raised platform, Duby said.

Drews applauds the work that the fall play cast and crew have put in, and she encourages everyone to come and celebrate the students’ work.

“I hope that [the audience] will have a lot of fun and laugh and get to see the hard work of all the students [put in],” Drews said. “They can go [watch the show], really see the story [build] on stage, and get that feeling that live theater brings.”