Collaboration proves there is no ME in ILMEA 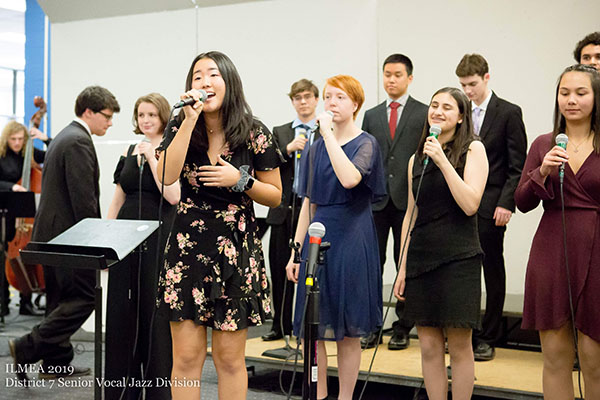 The Illinois Music Education Association (ILMEA) is a well-known organization that holds a competition for talented band, orchestra and choir members. Throughout the three-day-long competition, students from all across the state compete, refine their skills and meet other students they may never have met otherwise.

After contestants make it past the audition, senior Violinist Eugene Jang explained, they have a chance to compete in the District Festival, where all the schools from one district come together to perform.

“[ILMEA is] pretty big in Illinois and every high school knows about it if they have an orchestra program,” Jang said. “It’s for the best of the best for what they do.”

Tone, which is how one’s musical notes match the desired sounds, along with dynamics and rhythm are just a few of the criteria that judges look for when scoring a choir audition, senior Soprano Jenna Kim elaborated.

“You have several things that you need to prepare for the audition,” Kim said. “There are two prepared pieces you have to learn on your own and know very well, two types of scales (crematic and blues scales), and you also have to improvise and do skating for 24 bars. The last portion is sight reading, which is very difficult for a lot of people.”

Senior Brian De Stefano said the audition process to make it to the District Festival is complicated. De Stefano, a tenor two in choir, the lower sounding of the tenors, explained that the judges score you on a variety of fundamental things.

“I think that auditioning for the program is a really good test of your musical abilities,” De Stefano said. “All the auditions are blind, and they score you in the most objective way possible, but there are things on it that are intentionally [meant] to weed out people that can’t do this.”

The day of the District Festival, Kim said, the top two musicians from each part get called to reaudition for the state competition. They are recorded, and those recordings get sent to a panel of judges that determine if you will make it to state, Kim said.

“You’re competing against the entire state of Illinois at that point,” Kim said. “They don’t tell you what your rank is, you find if you make it into the group or not, then you find out you make it to state about a month later.”

From there, Jang said, members of ILMEA travel to Peoria, IL to compete in the State Festival. Based on how well you did in the audition, Jang clarified, you get placed in one of two orchestras: All State Orchestra and Honors Orchestra.

“I know for orchestra it’s really competitive, there’s a lot of good people that play, and I’m pretty lucky to get in,” Jang said. “There’s a lot of people in the orchestra, but since there’s so many people from Illinois, I think there’s less chance to be selected.”

Overall, Jang said, ILMEA is a very difficult competition, but he enjoys the challenge. He added that he didn’t get selected for the past two years because the audition excerpts are very difficult.

“It’s been pretty challenging,” Jang said. “Usually orchestra music isn’t that much of a challenge for me, but ILMEA is really hard. I didn’t practice that much for the district orchestra and the music was really hard so I struggled a bit.”

De Stefano thinks ILMEA is an amazing opportunity not only to experience what a true audition is like, but to meet other very talented musicians as well. Kim added that it’s a wonderful opportunity for collaboration. It is a sense of solidarity, Kim said, because all these schools come together for the same goal: to learn and make music together.

“Once you’re together at the festival, the rankings don’t matter; you’re just a talented group of individuals making music together,” Kim said. “The overall organization wants to teach people and spread music to the youth.”