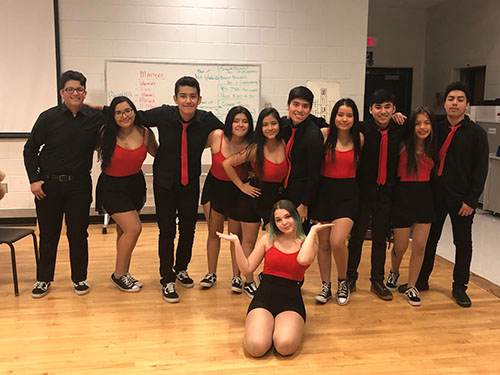 Lively latinos: Getting together for practice, members of Latino Heat walk into a place that feels like a second home to them. They have a special bond with one another, as they have the opportunity to express their ethnicity through dance together.

They see it, they want it, they work for it, they got it. While others try and learn trendy Tik Tok dances to share with the media, the cultural dancers at South take a different approach. Dance has truly become a part of their identity. For many, the dancers have become hard workers with one goal in mind: making it on stage to share a part of their culture with the crowd. Apart from having to keep up with schoolwork, the dancers are full- hearted and beam with pride as they prepare to share their heritage through dance.

Only 15 percent of students who took an unscientific survey conducted by The Oracle said that they have taken an ethnic dance class before. Robert Chromniak, senior and a former Polish dancer, had been dancing for eight years before recently quitting two years ago.

“I felt very proud and it was something not a lot of people did,” said Chromniak.

He explained that Polish dancing helped him learn history about his own culture and made him feel more connected with his roots. Chromniak was very committed to dancing, as his rehearsals were often in the city, a long 40 minute drive every two days.  Chromniak stated that his primary goals for the future are to focus on joining the military after high school, which is why dance has been put on hold for the time being.

“It will always remain a part of me and I know my way around the dance, so if I have to dance I know how to, but I don’t think I will be dancing again,” said Chromniak.

Riaz Gilliani, club sponsor and special education teacher, stated that Latino Heat, the only Latino dance club at South, is a way for people to connect with each other through their shared experience of growing up Latino.

“When I grew up here, I didn’t have a lot of people like me, but I went to [University of Illinois at Urbana-Champaign] which is like 50,000 people so you manage to find a lot more people like you who have that shared experience, and dance teams are a great way for people to find that,” Gilliani stated.

Gilliani described that joining a South Asian dance group was a way for him to become more renewed with his culture as being Pakistani and Indian, and that Latino Heat is one of the only clubs here at South for students to be able to do that. Gillani also explained how this dance group has affected him and the relationships that he has formed through it.

“The club allows me to get to know a group of students that I otherwise wouldn’t know or really interact with,” Gillani stated. “Just as any club sponsor would say, it allows you to really get to know students in a much better environment, not better but in a different environment in a place where people want to be.”

Greek folklore dancer and freshman Julie Antonoglu has been dancing for six years and said she started falling in love with the art because of her grandmother. She stated that her grandmother was the one to encourage her to pursue dance, as her parents didn’t know much about Greek dance.

“My grandma loves Greek dancing and when I was younger she would always be like, ‘Oh, you have to join these dance groups,’” Antonoglu said.

Though just like any commitment, dance comes with hardships, such as the time commitment you have to put in, Antonoglu stated. For Antonoglu, it took time for her to fully appreciate the art of  Greek dancing, she stated.

“I joined dance because of [my grandma], but at first I hated it, though now I love it,” Antonoglu said. “You can choose to do it twice a week or more, but I only really do one practice because Saturdays and other days I have stuff to do. But for those performances, they can take all day.”

Antonoglu said she’s able to meet new friends, which is one of the reasons she decided to keep dancing. Another reason that makes her want to continue is the fact that she can represent her ethnicity in a way she has never been able to before.

“I have a lot of fun and you’re dancing with friends so no one cares,” Antonoglu said. “I’m also up there representing my culture.”

Although at times it can get stressful for the students, Gilliani said, it pays off in the end. With hard work comes success, as Gilliani expressed through his appreciation for the dance team.

“They are a very driven group that is excited to show their culture,” Gilliani said. “Any dance team will tell you there are ups and downs, and after a long school day it is two to three extra hours, it gets stressful, but anything you do for that long is something that you want to see succeed.”

Sejal Schullo, social studies teacher and Bhangra Beatz sponsor, has been working at South for 18 years. Schullo said that she hopes the cultural dance teams will help create equity throughout the student community. She believes that these types of dance teams will arouse more cultural identity in students.

“I am hoping that it will help create a community where differences are not only celebrated but understood,” Schullo said. “Greater understanding of cultural identity will hopefully create more equity.”