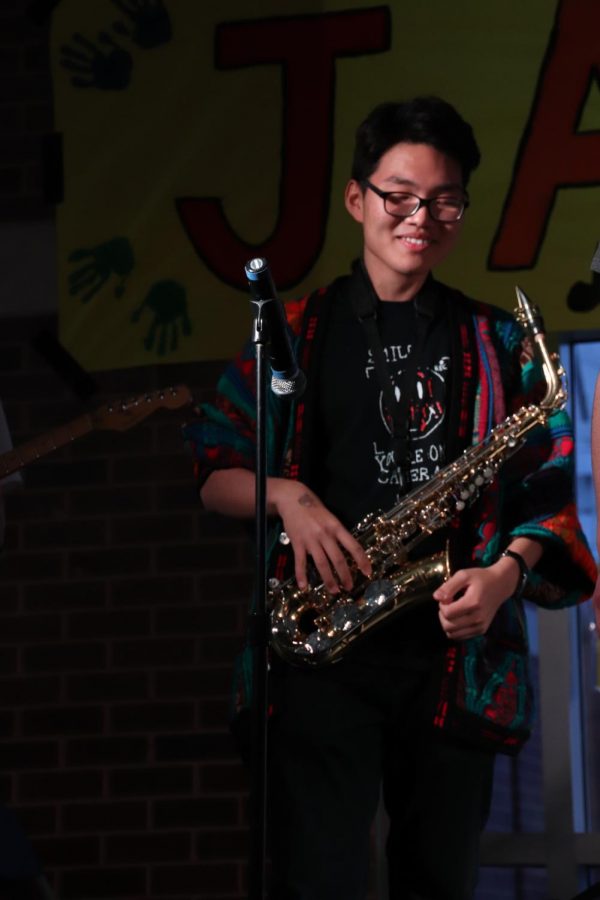 A NIGHT FOR HUMAN RIGHTS: Jamming on the stage, sophomore Yeon Park plays his saxophone at Jamnesty. This event took place on Friday, April 12 in the West Cafeteria and featured different acts as well as information speeches about human rights.

The sound of light tapping on a snare drum rings through the West Cafeteria as Perform!, the first of many live bands, begins their performance. Four spotlights shine down on them as the band plays for an audience congregated around tables near the stage, in front a large yellow banner proclaiming the title of the event: Jamnesty.

Strewn throughout students’ songs and poems are informative speeches that educate the attendees about human rights. Because of this mixture of information and entertainment, Jamnesty can interest people in issues that they would otherwise ignore or not try to understand, according to senior Carter Morgan, a member of Stand for Peace. Morgan believes Jamnesty is a great way to showcase new acts as well as draw attention to a good cause.

“The environment that’s created in Jamnesty through songs and through poems helps educate people and allows people to understand issues that they might not care about otherwise,” Morgan said. “Of course, it’s nice to fundraise, and send some of the money to people who are on the ground, making a difference in different areas of the world.”

The money that Amnesty gets from the event is donated directly to the Amnesty International organization. Jamnesty is also meant to spread awareness about human rights, according to senior Kaleb Garden, a member of Amnesty International. The event allows people to be educated about issues while also enjoying a concert.

“It’s really cool to be surrounded by like-minded people that care about human rights,” Garden said. “There’s so much bad in this world, it’s really comforting to know that there’s always going to be good people to fight the bad. Jamnesty is a reminder of that.”

Jamnesty is also intended to create a nice environment for people who are passionate about human rights to have fun and educate others, according to Garden.

“Being surrounded by people that you know care about the same things you care about, [who] have all these different stories and all these different backgrounds, [makes you realize] that they’re going to go out there and make a difference in the world,” Garden said. “There’s nothing more inspiring than that.”