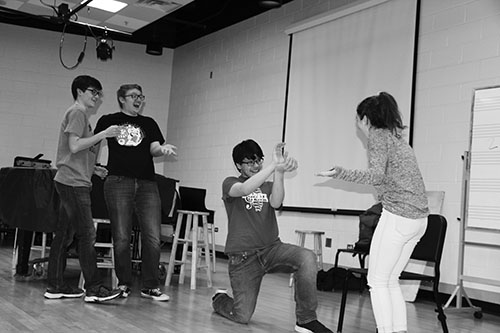 practicing pals: Rehearsing a scene, seniors Jack Taylor and Zach Reiss and juniors Brian De Stefano and Kendall Grenolds practice for the annual Senior One-Acts. They will carry on the tradition of many upperclassmen before them on May 15, when they will display their acts. Photo by Naomi Skyles

As the lights go down in a silent theater, South seniors’ One-Act Plays will come to life on the GBS stage. On May 15, these upperclassmen will reveal a world of creativity as one final performance before the seniors say goodbye to South.

This collection of creative minded juniors and seniors has put together the senior One-Act Plays for South’s drama program. The One-Acts have been a long-time tradition here at South says Josh Koo, student activities director.

“Senior One-Act Plays have been going on for approximately 20-30 years or maybe more,” Koo said. “The One-Act Plays are a way for students to get engaged in the arts without performing a full on play.”

This year’s sponsor is Lauren Rawitz, co-sponsor of drama club. Students of any age are allowed to act in the plays, but only seniors have the capability of directing the plays, says Rawitz. These student directors learn what it means to control a play environment, explains Koo.

Senior director Lauren Bundy has been involved in the South theater department since her freshman year, and decided to write her own original piece about sisters fighting this year. This event has been the best way to conclude her four years here at South, Bundy says.

“One-Acts are a great opportunity to finish off these four years in a meaningful way,” Bundy said.

One-Acts are not only a new challenge, but they inform students more about theatre. Bundy says she loves interacting with the actors and learning about other directors’ plays.

“We were all excited thinking about how the actors could contribute to the parts,” Bundy said. “I’m also looking forward to seeing the other One-Acts.”

These plays provide lots of opportunities for students to express themselves. The entire production is run by students, according to Rawitz, and Koo adds these plays really emphasize student leadership roles.

“It’s not only the student directing it, but they have envisioned it and came up with the entire story,” Koo said. “It’s cool to see that our students are so creative.”

Bundy feels the One-Acts have a bright future. As a graduating senior, she has hopes future students will continue to contribute so the program can flourish. Bundy says acquiring the new skill of directing has been very fulfilling to her.

“As far as the future of One-Acts goes, I hope that future generations of theatre students continue to have this opportunity,” Bundy said. “I love acting in plays, but there’s something fulfilling about writing and directing a play of my own.”

Seniors in One-Acts must be brave to put their thoughts and feeling out to the world, Koo says. Koo advises future students to not be insecure about showing the creativity they have but to be brave just as the seniors in One-Acts do.