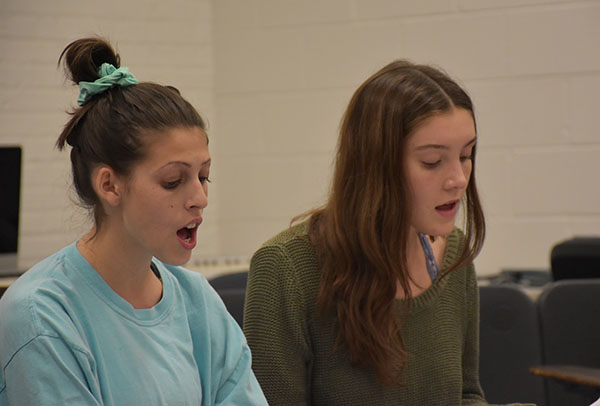 From Colbie Caillat to Jessie J, Solace sings it all. Led by co-choir Director Robert Shellard, the group consists of 10 girls. Solace is one of South’s a cappella groups and is known for covering a vast range of pop artists and songs, according to Shellard.

Senior Annabel Eigel has been a member of Solace since her junior year and is one of the two returning members this year. According to Eigel, the fact that the group only consists of 10 member has not only created a close-knit community for her but has also helped her grow as an independent singer.

According to senior Juliet Jiaras, her first experience with Solace was at the induction ceremony last year, “Solace at Sunset,” which takes place annually in June. At the ceremony, Jiaras says both current and new members sing one song together and participate in a symbolic candle-lighting routine, in which outgoing members light the candles of the incoming members and then proceed to blow out their own.

“[The ceremony] was kind of sad, but it was also really meaningful to me because I had looked up to these people for a long time,” Jiaras said. “Now it’s like I’m going to be the one that underclassmen are going to be looking up to, and that meant a lot to me.”

Similar to Jiaras, Eigel also remembers “Solace at Sunset” as a meaningful experience for her. However, Eigel was a current member of Solace at this time and says the concert itself was the performance she cherishes most from last year.

“I think our end-of-the-year concert was my favorite [show], probably just because [people] were there to see us, and so we knew that they wanted to listen to us [and] what we had to offer to them,” Eigel said. “That’s just a really cool feeling, knowing that people want to come to listen specifically for you.”