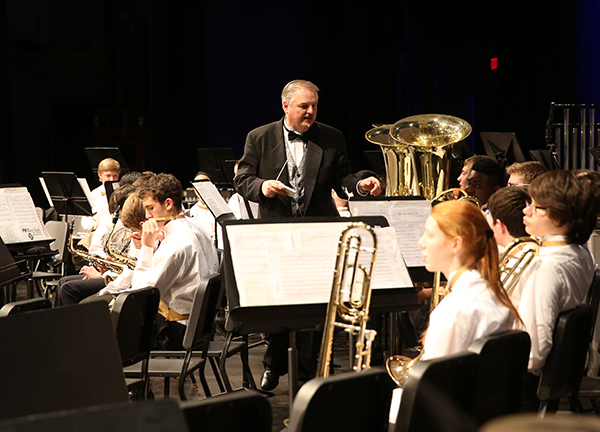 Graduating Greg: Leading South’s band members, Greg Wojcik, head band director, prepares to conduct his final concert at South. Wojcik has been a member of the Titan family for 38 years and is retiring this year.

“One band, one family.” This has been the motto of the GBS band program for the past 38 years under the direction of Band Director Greg Wojcik. According to Wojcik, this motto has been something he has tried to instill in his students over the years and is something that has bound his teaching curriculum. Wojcik explained that as he concludes his final year of teaching at South, he will miss his students greatly.

“[I am going to miss] the kids the [most when I leave GBS],” Wojcik said. “As I got older, I got to know the [parents] of [my students] more, and as I got to know the parents and I had my own kids, I changed as a teacher. [Being a family] is about taking care [of one another], you can’t do everything, but you know [how] to be there [for one another].”

According to Aaron Kaplan, GBS Orchestra assistant conductor, he has seen Greg’s presence as Band Director influence students and the program as a whole both as a former student himself at Glenbrook North in the Glenbrook Symphony Orchestra (GSO), and now as a colleague of Greg. Kaplan recalls one time in particular where Wojcik assisted him without being asked at the All State Music Conference a few years back.

“I remember this one time that we were in Peoria for the All State Music Conference, and we had to pay to park [our cars],” Kaplan said. “At the end of the day I was like, ‘Oh my gosh, I totally forgot to keep feeding the meter for my car’, and then somebody had told me that [Greg] had just kept feeding the meter all day for me. It’s just the little things like that.”

According to Greg, at the beginning of his career at GBS he faced a variety of challenges adjusting to the new environment and role as band director. Greg explained that one of the greatest lessons his colleagues taught him was that winning isn’t everything, and that the amount of trophies does not define the success of the band program. He said that in light of this, his colleagues constructed a “mock trophy” for Greg made out of everyday objects to teach him this lesson.

“[As the band] was winning a lot of contests, Mr. Pappas and I were kind of getting a little uppity about it, so [my coworkers] built a trophy for me,” Wojcik said. “The trophy stood six feet tall and [on this part] here is a mirror. They said to me, ‘[When you look in the mirror], is it worth stepping on people just to win?’ […] After I got the trophy, I decided that winning wasn’t the most important thing.”

Greg said that throughout his GBS career, he continued to set goals in order to expand the Band program. One of the changes he explained was splitting the band into three different sections. Then, according to Greg, he used technology to enhance his classes in order to keep up with newer times and meet industry standards. According to Mark Maranto, Fine Arts Department instructional supervisor, he believes that the expansion of the band program has touched nearly every member of the student body in some way.

“When I think of [Greg], I think of how the band program here and everything that he has done to make it the amazing program that it is [today],” Maranto said. “His impact is felt all over this building because if you think about it, a lot of our events here involve music in some way. You’ve got pep band for athletic events, and [variety show.] The list just goes on and on, and he has provided that.”

Edwin Baik, junior and bass clarinet player, said Greg is not only an inspiration to him but to the rest of the band as well. Baik described Greg as welcoming and passionate, and he added that Greg’s largest impact lies in the effect he has on his students.

“He has influenced a lot of people to pursue a career in music, […] or not even pursue but just continue to play in college and on,” Baik said.

Julia Sultz, senior flute section leader, agrees with Baik in the great influence that Greg has had on not only her experience in the program, but in the overall environment of band. Sultz added that this open and family-like environment which Greg has fostered through his “One band, one family” motto has allowed her to make some of her greatest friendships through the program.

“[Greg has encouraged the whole aspect] of saying to one another ‘Hey we’re not just here to put on the best show, we’re here to become close with each other and make these lasting friendships,’” Sultz said. “This, [for me], has become a really central part of band [and my experiences in the program].”

According to Aaron, Greg made a notable impact on his own career choice. He said that growing up with a dad who worked at GBS allowed him to experience both his band at Schaumburg High School and his father’s band at GBS.

“It was kind of cool, because I got to grow up and see the community here and how this worked and how the program ran and how important that [Greg] was to the school and to the students,” Aaron said. “It was really easy to kind of see like, ‘Hey that’s something I would like to do.’”

In addition to the role Greg has played in the lives of students, Maranto added that Greg’s relationship with faculty and his colleagues will be greatly missed. Maranto explained that throughout his first year of working as the Fine Arts Department instructional supervisor, Greg has served as a mentor to him in many ways with his new role, something that he is sad to not have in the years to come.

“There are lots of analogies that apply to [Greg],” Maranto said. “He is like everybody’s uncle, father, etc. Even though he is not that much older than me, he still is a father figure to me. He comes in, he gives me advice and we talk through things and I go to him with concerns that I have and he is always able to give me his advice based on four decades of experience.”

Even though Greg won’t be around next year, he says he has full faith in his son and the new band director, Brian Boron, to grow and expand the Band program. Maranto agreed with Greg in that he has confidence in the future of the program and its growth. However, he admitted that he, with fellow Titans and faculty, will greatly miss Greg’s presence at GBS in the years to come.

“[What will be missing next year] is not having someone who has been here through the 1980s, 1990s, 2000s, 2010s,” Maranto said. “[Greg’s] investment in this place goes back so many decades that he knows so much about everything. That’s what will be [missing without Greg].”