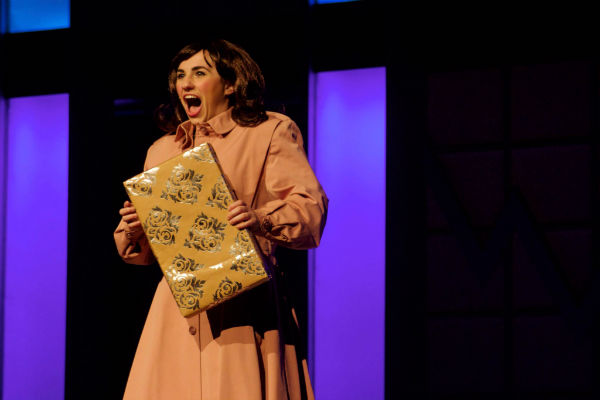 Shaky knees, stuttering and butterflies are no issue for senior Julia Packer as she dominates her second home: the stage.

Packer can be seen in the Music Department at South year-round as she participates in fall play, spring musical, Chambers and Scat That!

Packer first began professionally acting in 6th grade. From then on, her family supported her journey in musical theatre and influenced her outlook on acting. According to Packer, she had a great musical background growing up with her family.

“My grandma is a singer, my aunt and uncle can sing and my dad was in choir — so we’re really into the arts,” Packer said.

Although Julia’s mother, Sarah Packer, wasn’t involved in music, she still encouraged her daughter to pursue her dream.

“She loved to sing, and she loved to dance, so it was a natural progression of her interests,” Sarah said.

Starting from 6th grade to senior year, Julia has been frequently practicing her acting skills. She first began acting at the Acting Training Center and has acted professionally with the Glenbrook South performances ever since.

“She’s very professional in a sense in all assets of a performance, and she has a lot of experience outside of school as well,” Sarah said. “Working with the repertoire company [of the Acting Training Center], a lot was really expected from her, so I think she takes it very seriously as much as she has fun with it, as well.”

Julia performed in the 7th grade where she played a supporting character in Les Miserables at the Actor’s Training Center.

“[The performance] was awesome,” Julia said. “It’s a professional setting and theater; you work with people in the business there, and it’s tough, but that was something that I just loved and started doing seriously later on.”

When entering the first year of Glenbrook South, Julia immediately engaged in theater by performing in Phantom of the Opera. By sophomore year, she was frequently auditioning for roles and starred in Westside Story.

“What makes Julia stand out is her presence[…],” senior Aaron Kahn, a friend of Julia’s, said. “She has confidence, and that really stands out to a lot of people.”

One of Julia’s most significant performances was last year’s, Legally Blonde, where she had the opportunity to play the lead role, Elle Woods.

With senior year slowly ending, Julia had one more opportunity to shine in the spotlight. Her last theatre performance with Glenbrook South was Rosemary Pilkington in How to Succeed in Business Without Really Trying.

Julia plans to continue her journey of theatre in college, where she can pursue her career in acting.

Julia looks forward to her career as an actress. To her, theatre is a “freeing” experience that doesn’t only affect her, but also those who watch the show.

“I think it’s so important just to be a part of [musical] because you can change someone,” Julia said. “You can really touch someone in the audience.”