From drama to comedy, fall play shines through 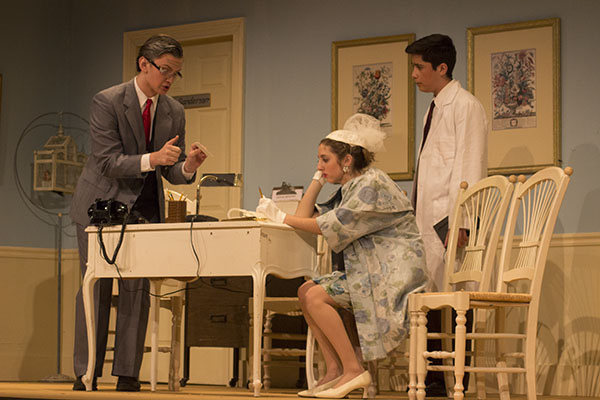 Unlike previous fall plays that South’s Drama Department has performed, Harvey, a play in which Elwood P. Dowd claims to have a six-foot tall rabbit friend named Harvey, is a comedy. Senior Anna Busch, who played Elwood’s sister, Veta, believed that this change in pace was refreshing, and the cast was excited for the performances spanning from Oct. 22 to Oct. 25.

Beth Anne Barber, director of the fall play, said that the students’ support for each other throughout the entire process was what made Harvey special. The off-stage chemistry carried into their performances and enabled them to work as a team.

Junior Chuck Quinn, who played the lead role Elwood P. Dowd, felt particularly excited about performing Harvey because it has always been one of his favorite plays. It had greatly impacted his own life, and he hoped the audience would be able to have the same experience.

“Even before Harvey was announced as fall play, it was one of my favorite plays that had a profound effect on me,” Quinn said. “It’s one of those plays where you walk away a different person and have a different view on life. Definitely for the better.”

According to senior Alessandro Berto, who played Elwood P. Dowd in the opposite cast, Harvey has a very important underlying message. He hoped the audience could learn from the play as well as enjoy the comedic aspect of it.

“Harvey is about accepting yourself for who you are,” Berto said. “We’re all different. We’re all from different walks of life [and have] different experiences. Harvey brings that together and shows how one man who sees an invisible rabbit can affect the life of everyone else, when all they need to do is accept him for who he is and be happy for him.”

Moreover, Berto’s greatest hope was that the audience would leave the performance with a different outlook on life. He said that one of the most rewarding parts of being an actor is getting to have that impact on the audience.

“I hope the audience leaves with an idea that we’re born with good intentions, that we don’t try to hurt each other a lot of the time,” Berto said. “I want people to walk out of that theater thinking that, just because someone’s different than you, it doesn’t make you any better.”