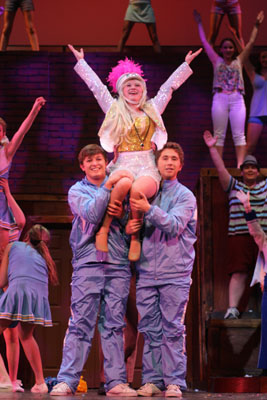 Behind every Elle Woods is more than a blonde Malibu Barbie. Behind every Glenbrook Musical, more than 173 high school students strive for excellence. Glenbrook South and North students performed Legally Blonde in this year’s musical on Wednesday, April 30 through Saturday, May 3 at North.

The musical follows sorority girl Elle Woods on her journey to Harvard Law School. According to junior Julia Packer, who plays the role of Elle in the show, the musical portrays an important message to the audience through the lense of comedy.

Packer comments that not only has the amount of pink in her wardrobe increased, but also her awareness of the meaning behind the story. Packer also comments that the show is very empowering for women.

“Although Elle seems to be just some blonde, she really proves to everybody that you can look past your looks, and I think that’s what I admire about Elle as a character,” Packer said. “She’s so much more deep of a person than people perceive her as. I think that working on her, I wanted to make her come across like that, not just an iconic character from a movie but so that she’s more.”

Director Julie Ann Robinson stated that one of the challenges that the members of the cast face was some difficulty that Elle herself faces in the story.

“It’s a great message for girls that you can be pretty, smart, and funny all together,” Robinson said. “As a teacher of Improv Comedy, I know there are a lot of girls who are afraid to be funny because they think ‘If I’m funny, then I wont be attractive,’ and they’re wrong. The world may try to pinpoint you in one way or another, but this show is about overcoming those obstacles and believing in yourself.”

Chuck Quinn, who plays Elle’s main professor, said the time commitment was demanding, but the final product made the whole experience worth the hard work and effort.

“It might be grueling during that week and a half where we’re [at rehearsal] until 10:00 every night, but it’s definitely worth it when we finally see what we put together,” Quinn said. “It’s really cool to just […] build a story with other people […] and see all 1,100 people in the audience cheering for you when you finish.”

Jack Riley, freshman chorus member, testifies to Robinson’s efforts at trying to feature all of the actors. He believes that the show overall is not solely about the lead, but about the entire cast as a whole.

“There’s always a group effort involved […] it’s not like ‘Ok you’re the lead so you’re the whole show,’” Riley said. “I have one part, The Jetblue Pilot, where I come on and say ‘Thank you’ and that’s my big debut.”

The show did more than draw the eyes of viewers and entertain the audience. During intermission, ushers raised money for the animal shelter, Our House of Hope, according to senior Hannah Schiller, who played Paulette—a friend of Elle’s and worker in the salon Elle attends. The charity was chosen based on the role of Elle’s and Paulette’s dogs, Bruiser and Rufus, respectively, in the play. Both Packer and Schiller commented that working with the dogs was an exciting new experience.

“It can be an obstacle in that you never know what they’re going to do,” Schiller said. “They could walk off the stage and we’d just have to roll with it. But with that mindset, it’s kind of a growing opportunity too because learning how to improvise has been a nice experience.”

Packer explained that the show’s opening night was interrupted by a fire alarm. Despite the slight setback, the cast was able to bounce back, showing their strength and talent.

According to audience member Linda Ring, the professional ability of the cast to maintain character in a joint effort made the musical remarkable. Working cohesively, the cast was able to portray the story as if performing as professionals.

“[The actors] really seem to be cohesive,” Ring said. “I see a lot of professional theater and this is just as good as anything I’ve seen in the broader Chicago area.”

Another professional aspect of the show was the sound and stage settings, according to Schiller, who believes the crew plays a major role in this logistically challenging musical.

In charge of various responsibilities ranging from curtains to lighting, the crew entertains the crowd as much as the cast does. One thing to note is their expert use of lighting and stage settings to portray emotions and the interesting storyline, Schiller said.

“This year is more bright lighting because it’s a more exciting musical […] there’s one song called ‘Blood in the Water’ during Elle’s first day at Harvard Law School,” Schiller said. “The stage is bright red which portrays that fearful emotion she has, and it’s shown by the lights, which is really cool.”

According to junior David Sucher, who plays the role of Emmett, Elle’s love interest, the overall experience allowed him to learn in a unique environment.

“I’m surprised that sometimes I learn a lot more by doing something like this than what you learn in a class,” Sucher said. “I really just want [the audience] to say ‘Those kids really look like they’re having fun’ because […] that’s the most important thing we have to offer.”