Smelyansky incorporates music in every aspect of her life 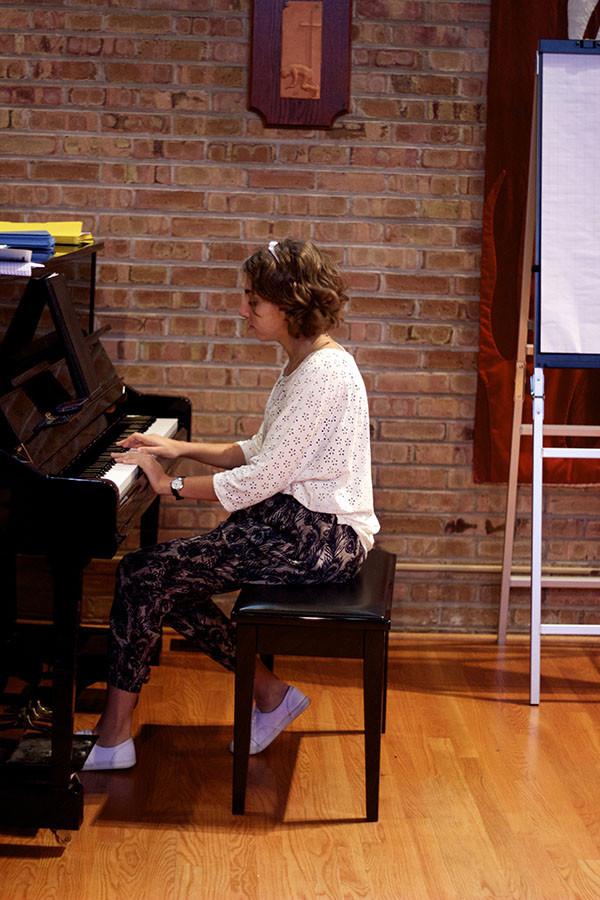 Yo-Yo Ma, Judy Garland and junior Stephanie Smelyansky all have one thing in common: each have had the honor of performing at Carnegie Hall in New York City. According to Smelyansky, music has always been a huge part of her life, and her passion and involvement in the Campanello Children’s Choir led her to that famed stage.

The Campanello Children’s Choir is a competitive choir that performs around the Chicagoland area and in different parts of the country. Smelyansky sings in the concert choir and is an assistant teacher and piano accompanist for the younger choirs.

“[Campanello Children’s Choir] made me more patient, more competitive, very determined and a bit of a perfectionist because I’m so used to practicing one thing over and over again,” Smelyansky said. “[…] It’s also been really good to learn leadership because once you get older, it’s your responsibility to help the younger kids in the choir.”

When Smelyansky was 5 years old, she went to see one of her friends perform in the Campanello Children’s Choir and was immediately inspired to join.

“I’m a really extroverted person, and I’m also very competitive,” Smelyansky said. “So seeing my friend who was older than me on stage, I was like, ‘I wanna be just like him. I wanna be better than him!’”

In 2012, Smelyansky went with the concert choir to perform at Carnegie Hall. She described performing at Carnegie Hall as the greatest honor for any classical musician. The weeks leading up to the performance, Smelyansky spent every free second learning her music.

“I was so excited just to see the hall and was thinking, ‘Oh my god I made it, this is everyone’s dream to perform here,’” Smelyansky said. “We almost had a full house, my name was on the program, it was unreal. This doesn’t happen to the average person, and I felt so blessed to be there.”

According to Stephanie’s mom, Anna Smelyansky, Anna also tried to incorporate music in their lives, as soon as Stephanie developed a greater appreciation for music. When Stephanie was younger, her interest was sparked by the concerts her mom took her to.

“When we traveled in the car I mostly had my classical channel on the radio and she sort of grew up with that and was introduced to more and more types of music,” Anna said.

According to Stephanie, her choral director, Marianna Kosaya, has also had a huge influence on her. She describes Kosaya as someone who pushes her to her limits and always tells her the truth.

“She wants perfection and it makes me work so hard in everything I do,” Stephanie said. “People make fun of me because I’ll take a pencil in the middle of the day and just start playing; I’ll hum to myself during class because I want to be perfect because she demands perfection and it’s just so inspiring to have someone demand such a high level of you.”

Kosaya said that Stephanie is one of her best students and recognizes her strong passion for music.

“Last year she was supposed to play [piano] in front of an audience and she wanted to stop, she wanted to escape,” Kosaya said. “[I told her] it’s not about yourself, it’s about the music that lives in you.”

Stephanie thinks of the concert choir as a close-knit family.

“We all have this love of music, so the best bonding experience is when someone will sit down at the piano during our breaks and start playing a song, and then, one person will start singing and three other people will spontaneously start harmonizing,” Stephanie said. “It’s just like a family because when we sing all of us blend so well together.”

According to Stephanie, sometimes it becomes very hard to balance everything.

“I’ve missed a lot of school events like school dances [or] games I’ve wanted to go to for rehearsals [and] concerts, and sometimes I’ll come to school with three to four hours of sleep after a concert night.”

Although the concert choir performs classical music, Smelyansky enjoys all kinds of music. Along with being a singer and piano player, she also plays the clarinet and ukulele, she said.

“I have to listen to what I’m going to perform and have an appreciation for it,” Stephanie said. “I have classical music on my iPhone, but right next to it is a screamo band.”

According to Aaron Wojcik, Stephanie’s band director and electronic music teacher, music is a part of who she is and it defines her as a person.

“She may not know how to play every one of the instruments, but she seems to be able to pick up most things, and that’s something she’s developed,” Wojcik said. “Stephanie’s a person who has the talent. She could  probably go walk out there and put on a fairly decent rock beat if I asked her to.”

According to Stephanie, she wants to pursue science in college, yet she doesn’t ever want to end her music career.

“I just want to make sure it’s still there because it’s always been such a big part of my life and I feel like I’d be losing myself if I lost music,” Stephanie said.