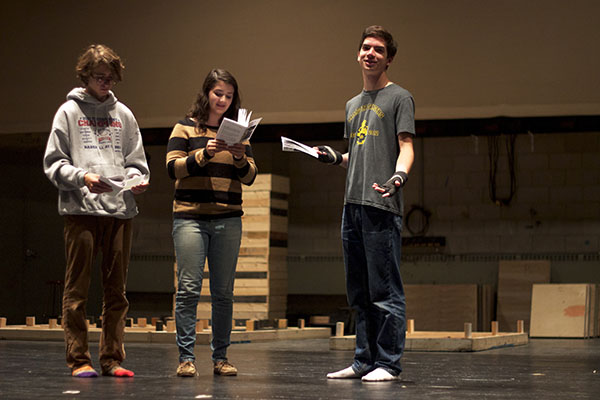 A loud clank echoes around the auditorium as a single spotlight illuminates the room.  Actors and actresses take their positions. A startling quiet settles in the auditorium. As one actor opens his mouth, the audience is plunged into a whole other dimension, a world as real as the actors make it.  But before any of this is possible, South students in the fall play work relentlessly to make it happen.

This year’s fall play, “Flowers for Algernon,” showing from Oct. 23-27, depicts the story of a man’s struggle with a mental disability thought to be cured through experimental brain surgery.

According to Director Beth Ann Barber, “Flowers for Algernon” was not only chosen for its multiple roles or popularity among younger audiences but also for the strong lesson in the play that all people should be aware of.

“I think that the message [of the play] is a really good one, that we are all humans, no matter what our differences are,” Barber said.

Given the sensitivity of the content, Barber said that she harbors some fears for this year’s play.

“I don’t want anyone to think in any way, shape, or form that we are […] making fun of people with disabilities,” Barber said.  “In fact, [I want people to think] the opposite, that everyone is unique […].  If anything, I want to raise awareness [that], no matter who we are [and] no matter what we are, we should embrace and appreciate everybody.”

According to senior Atticus Hebson, who plays Charlie Gordon, a man with a mental disability, this role was one of the harder roles he has had to play in his four years in theater at South.

According to Barber, actors put in hours of work into the production of the play itself including daily rehearsals and memorization of lines. Barber holds high expectations for her students, not only to better their performing skills but also to better themselves as actors in general.

“I expect the students to bond as a group [and to] become a little family,” Barber said. “I expect them to work hard [and] to work together as a family towards a common goal.”

According to senior Zack Bauer, who plays the role of neurosurgeon Dr. Strauss, seeing the cast come together as a family and the topic of the play influenced his decision to try out.

“You’re with [these] people every day, so you build close relationships with everyone,” Bauer said.  “The play itself did intrigue me.  It’s a play that isn’t so much […] in the past, but more contemporary. It is also a very interesting subject. It’s definitely not a play that’s very cliche, so I think people like that.”

According to senior Alex Canary, who plays Charlie’s mother, Rose Gordon, it is hard to move on when the play comes to an end.

“It’s kind of depressing,” Canary said. “It’s like this world that you’ve lived in, that you’ve worked so hard to build up, […] is destroyed, literally, by breaking down the set after the final performance.  You return the costumes, take off the makeup, and there’s a piece of you that’s gone, and you’ll never get that back. [That] is really the beauty of theater, but it’s hard [to get accustomed to].”